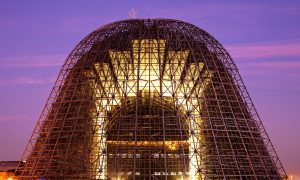 Last month, Silicon Valley spectators looking for a tech war between Uber and Google were sorely disappointed when the latter clarified that it was developing a ride-share app for its own employees, not the general public, and they are about to be disappointed once again.

On Monday, Google announced that it was developing its own wireless service, unleashing speculations that a brawl was in the making between the search-engine company and wireless Internet giants like Verizon and AT&T.

Yet a Google executive had said that the company’s goal was to drive innovation, not compete with other wireless conglomerates, and none of the company’s recent actions suggest otherwise.

Most telling was Google’s decision in January to sit out of the FCC’s historic auction of $41.3 billion in wireless spectrum rights, whereas Verizon and AT&T had together spent more than $28 billion on those rights.

If Google was serious about going into the wireless business, it would have only needed to spend a small fraction of its towering cash pile, which is estimated to reach $100 billion by the end of 2016. It chose not to.

Instead, the company will partner with Sprint and T-Mobile to resell the latter’s wireless services under Google’s brand, an arrangement that gives the wireless incumbents the controlling hand. Google’s contract with Sprint, for instance, has a poison-pill clause that would trigger a renegotiation of the partnership if Google’s customer-base grows beyond a certain limit.

Indeed, the company has been upbraided for not doing more with its capital. In a talk with Eric Schmidt in 2014, venture capitalist Peter Thiel said that Google was “no longer a technology company” because most of its revenue comes from its technologically stagnant search engine.

“If we’re living in an accelerating technological world, and you have zero percent interest rates in the background, you should be able to invest all of your money in things that will return it many times over,” Thiel said, noting that Google’s decision to let their capital accrue interest was a sign that “you’re out of ideas, maybe it’s a political problem, the government has outlawed things.  But, it still is a problem.”

Ironically, Google’s aversion to competition, which explains much of its cash stockpile, is perfectly in line with Thiel’s own business philosophy. In his book on entrepreneurship, “Zero to One,” Thiel said that much of the competition in capitalism was in fact wasteful, and that smart companies should invest to build monopolies.

Thiel recounts how his time at PayPal in the late 1990s, when the company was a startup that was competing for dominance of the Web payment market with X.com, then headed by Elon Musk, taught him the deleterious effects of competition first-hand.

“Many of us at PayPal logged 100-hour workweeks. No doubt that was counterproductive, but the focus wasn’t on objective productivity; the focus was defeating X.com,” he wrote. “One of our engineers actually designed a bomb for this purpose.”

Much of the competition in capitalism was in fact wasteful, and that smart companies should invest to build monopolies.

Today, the tech industry is seeing a similar fight between Uber and Lyft, where negative-sum practices like PR campaigns and poaching the other side’s drivers are the main instruments of competition.

Google has studiously avoided costly competition in recent years, and it’s difficult to see why it would break the pattern here.

Ventures like Google Glasses and autonomous cars are areas where Google began so early that a monopolistic edge is conceivable. The wireless industry, on the other hand, is already a well-established market, one where Google would not likely seriously try to compete.

But purveyors of a gladiatorial tech industry shouldn’t lose hope yet. Facebook’s effective monopoly on social networks means that it too has plenty of cash to throw around, and its purchase of Oculus VR demonstrates a taste for eccentric investment that matches Google’s.