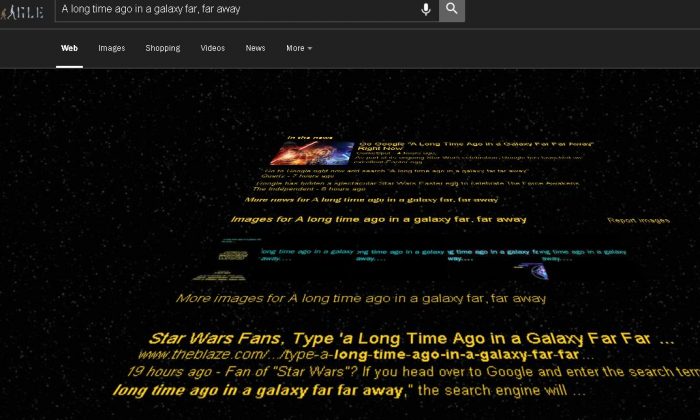 If you search, “A long time ago in a galaxy far, far away,” in Google, it will display a classic “Star Wars” style opening crawl, showing yellow fonts going back into space. The entire background will automatically transform.

The Easter egg appears to only work in Google Chrome. Typing the phrase in Google.com in Firefox and Internet Explorer doesn’t work.

The “Star Wars” score from John Williams will also play if one clicks on the sound button on the bottom-right corner of the screen.

A blog post showed the creation of google.com/starwars, which was in collaboration with Disney and Lucas Arts. “You can choose the light or the dark side, and then watch your favorite Google apps like Gmail, Google Maps, YouTube, Chrome and many more transform to reflect your path,” the post reads.

On Nov. 24, “Star Wars” director J.J. Abrams said the first word said in the film will be “this” on Jimmy Kimmel’s show.