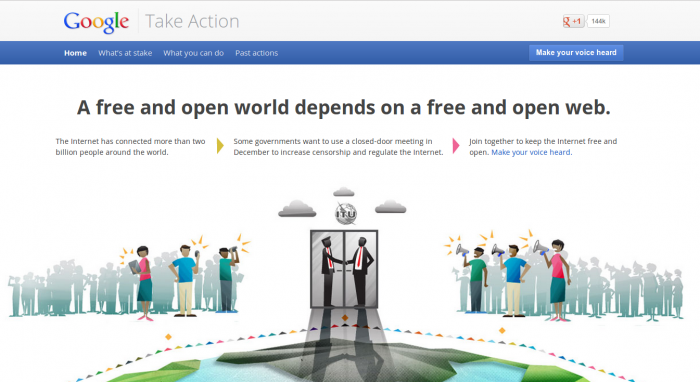 Google's Take Action website asks netizens to act against upcoming UN/ITU proposals for the Internet backed by China and Russia, which would allow governments to control the Internet within their borders. (Screenshot: Epoch Times)
Tech

Google has come out swinging against a United Nations (UN) led effort to decide the future of the open Internet at a December meeting of the International Telecommunications Union (ITU), a body run by the UN.

Google’s website, at https://www.google.com/takeaction/, provides detailed information about possible upcoming legislative changes at the behind-closed-doors ITU meeting next month. The website features a video of people around the world saying “a free and open web depends on me” in their native language and requests the viewer to take action to “tell them (governments) you support a free and open web.”

On its website, Google says that in December, “the International Telecommunication Union (ITU) is bringing together regulators from around the world to re-negotiate a decades-old communications treaty” and that “proposed changes to the treaty could increase censorship and threaten innovation.”

The upcoming UN/ITU proposal is not new. Over the last year, countries with repressive Internet censorship–particularly China and Russia–have become more vocal about having the United States turn over oversight of the core Internet functionality to the United Nations.

The United States has expressed serious concerns about the UN/ITU proposal. In May 2012, lawmakers on both sides of the political spectrum expressed opposition to the move. Sen. Marco Rubio (R-Fla.) criticized the UN proposal, saying that China and Russia were “not exactly bastions of Internet freedom” and that “any place that bans certain terms from search should not be a leader in international Internet regulatory frameworks.”

In June 2012, the United States passed a broadly bi-partisan bill that ruled out handing over Internet control to the United Nations or the ITU, fearing that the handover of control would be used to censor Internet operations in member countries and used to repress the rights of citizens there. In an op-ed in The Wall Street Journal in February 2012, Robert McDowell, Republican commissioner on the Federal Communications Commission (FCC), warned that “a top-down, centralized, international regulatory overlay is antithetical to the architecture of the Net.”

More recently, the final Russian proposal to the ITU was leaked on the Internet, which only served to raise further concerns. The Russian proposal, made on November 13, makes no bones about its desire to control all Internet traffic within its borders. Particularly, the proposal states, “Member States shall have the sovereign right to manage the Internet within their national territory, as well as to manage national Internet domain names.”

Overly aggressive censorship is not just a trademark of the Russian government. Earlier this year, China hosted a “Internet Roundtable for Emerging Countries,” where the participants agreed that “The Internet must be managed by governments, with a particular focus on the influence of social networks on society.” Such government management would of course suit China, whose Communist regime has been notorious for a large scale Internet censorship and monitoring–along with wide-scale human rights abuses–in the world’s most populous nation.

The Google campaign has been the most visible public-facing advertisement on the ITU Internet proposals, which has been largely ignored by mainstream media and hidden from public view. While it could be argued that Google’s concerns about Internet censorship are selfish (the search giant makes its revenues from display ads on a variety of content after all), there is no doubting that Google has led the way in recent years in fighting Internet censorship around the world, whether it has been publishing an open and public Transparency Report about law-enforcement or takedown requests, its leaving China over Internet censorship and hacking in 2010, or blackening its famous logo on its home page in January 2012 voicing opposition to the PIPA/SOPA bills.