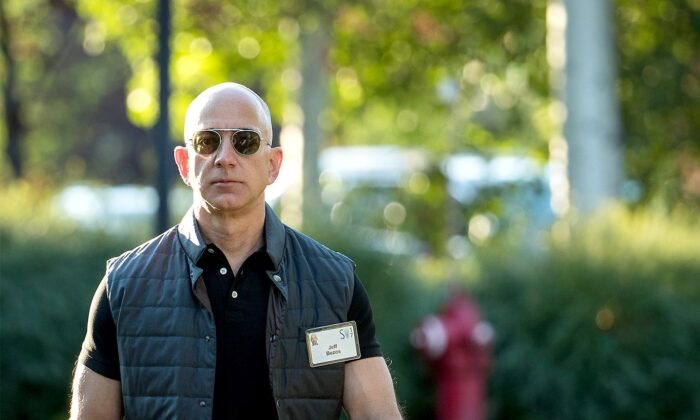 Is it me or is Jeff Bezos looking pretty buff these days?

As a former recreational bodybuilder myself, I know the kind of work that goes into building a great physique. I can respect the work he’s done.

But beyond Bezos flexing at the gym, Amazon has been flexing its considerable muscle in the tech market for years.

Nearly 20 years ago, the former bookseller launched a division called Amazon Web Services. It was an offshoot of an internal project designed to make Amazon’s internal services more efficient. And when you build a better platform for yourself, why not offer it to other online entrepreneurs and users. It’s the American way.

It didn’t take long for other major tech companies to decide they wanted in.

In 2008, Microsoft launched a cloud computing platform called Azure that provides developer, computing, storage, and communications services to name a few. Microsoft has grown to become the second-biggest player in the cloud market with roughly 20 percent.

And shockingly, the company on the bronze medal platform—way behind Amazon with a mere 6 percent of the market—is Alphabet/Google.

Now They’re Out to Fix That

To be fair, Google has built an impressive cloud computing platform. As a company with the resources to hire the best and the brightest of everything, that’s not a surprise. What is a bit surprising is that they’ve never been able to grow that market share.

The original 800-pound tech gorilla—who learned that horizontally integrating across a range of free apps including search, email, calendars, maps, photos, and so many more was the best way to keep internet consumers sharing their personal data with them—just never quite made a splash in the back-end business.

Now they’re out to fix that. And the best way for a company—with a market cap of around $1.85 trillion—to do that, is the way that the tech sector has grown its customer base for years.

They’re going to buy them.

Horizontal investment served Google well when they were growing their search/ads business. Why not now?

Lately Google has been pumping money into companies as diverse as Tempus Labs (a data health care company), ADT Inc. (a home security company), and the CME Group (the world’s leading futures exchange) in exchange for commitments that they will use Google’s cloud services.

These investments by Google will certainly benefit all the companies involved. But the biggest winner to walk away may still be Google.

Is This Bullish for Google?

Maybe, but there may also be even better opportunities out there for investors.

Most investors don’t realize it, but 71 percent of tech stocks in the NASDAQ composite index have been in bear markets for the better part of a year. That means while they’ve been consolidating, the big tech growth stocks have been holding the market up.

Once the Fed gets around to raising interest rates, I believe there’s finally going to be a big re-rating where the big tech names are concerned. Plus or minus 5 percent, I don’t think they’re going to have a great year. (Google may be the exception to that prediction, for now. I think they’ll do fine in the face of the coming rate hikes.)

But given the situation of the market as a whole, there may be better plays to look at among the lower tier tech companies. For most of the past year, companies like Zoom, Teladoc Health, and Datadog have been consolidating.

I think once we get past the first Fed meeting of this year—and barring a 50 basis point interest rate increase at any one time—these forgotten high-growth companies might offer even better value.