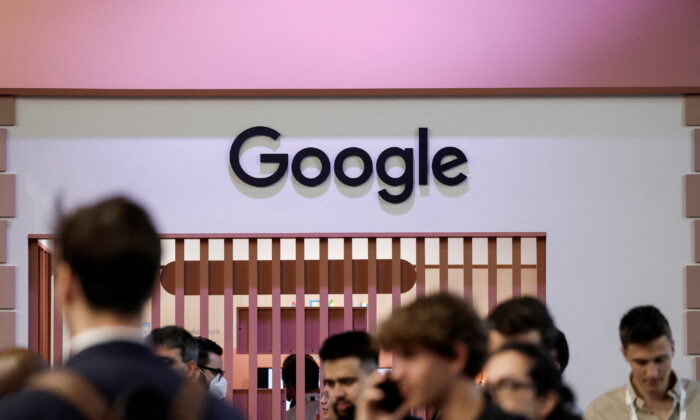 A logo of Google at its exhibition space, at the Viva Technology conference dedicated to innovation and startups at Porte de Versailles exhibition center in Paris on June 15, 2022. (Benoit Tessier/Reuters)
Companies

Of the $69.69 billion in total revenue reported by Alphabet, 81 percent came from Google’s ad business. This was also in line with market expectations of $69.88 billion, according to data by Refinitiv.

“Despite the underwhelming quarter, expectations were so low that investors blew a sigh of relief,” said Jesse Cohen, senior analyst at Investing.com, in a Reuters article.

Alphabet executives had warned that Google was not immune to the economic pullback. However, Google search ads are said to be better positioned to weather the uncertain market because they tend to be less expensive for ad buyers.

In addition, search ads are directed at people searching for a specific term, producing better results and adding to the incentive to publish ads via Google search. Alphabet CEO Sundar Pichai attributed the company’s second-quarter performance to be driven by “Search and Cloud.”

“The investments we’ve made over the years in AI [artificial intelligence] and computing are helping to make our services particularly valuable for consumers, and highly effective for businesses of all sizes. As we sharpen our focus, we’ll continue to invest responsibly in deep computer science for the long-term,” Pichai said.

Snap Inc., the developer of Snapchat, for example, reported only a 13 percent increase in revenue for the second quarter, the slowest growth rate in the company’s history. Net loss was reported at $422.1 million, a massive jump from the $151.7 million net loss reported a year back.

In a call with analysts, Jeremi Gorman, Snap’s chief business officer, said that digital ad spending is “definitely easier to turn off.” In an economic slowdown, digital companies tend to be the first to suffer negative effects because customers can easily switch off spending. Other ad channels like TV commercials are much harder to scale down or cancel immediately.

“So, as companies are reevaluating their priorities and their cost structure, they are looking at things like digital ad spend,” Gorman said, according to the Wall Street Journal.

Twitter’s second-quarter revenue declined by 1 percent year over year. The company blamed “advertising industry headwinds associated with the macroenvironment” as one of the reasons for the poor performance.