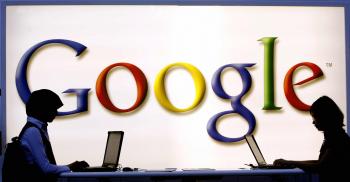 The World’s leading Internet search engine Google Inc., announced positive growth with first-quarter results, noting contributions from online advertising however falling short of some analysts’ estimates. The shares dropped to $31.30, or 5.3 per cent, to $564 in after-hours trading on the Nasdaq Stock Market. Prior to the earnings report they closed at $595.30, up 1.1 per cent on the day. The share drop suggests that investors are not convinced that Google’s robust performance is convincing.

If the expenses covering employee stock compensation are not included, the earnings per share would be $6.76, and according to surveyed Thomas Reuters estimates, earnings per share would have exceeded the consensus analyst expectations of $6.60.
On the other hand, estimates compiled by Bloomberg peaked at $6.91 suggesting that Google fell short of some expectations, painting a more conservative picture.

There is certainly an upsurge in Internet ad expenditure, according to Intel Corp., which monitors the technology industry, in reference to the overall sentiment and predictions of increasing sales and profit margins.
Nevertheless, Google’s first-quarter results have been dampened by market commentary. “Strength in the economy and previously reported tech numbers, such as those this week from Intel, may have gotten investors overly excited about the potential for a big beat from Google,” said Clay Moran, an analyst at Benchmark Co. in Boca Raton, Florida, who recommends buying the shares and doesn’t own any himself as he stated in an interview with Bloomberg.

The Mountain View, California based Google claimed that the number of paid per click advertisements increased by 15 percent in the first quarter compared to 2009 and climbed around 5 percent from last quarter’s results. The cost per click service rose around 7 percent from 2008, but dropped a 4 percent from last quarter. The key difference between the two advertising tools is that cost per click refers to the amount of money an advertiser pays the search engine/Internet publisher for a single click on its advertisement and connects the user to its own Web site. Pay per click is an Internet advertising model whereby advertisers pay the host of their Web site only when their ad is clicked on.

Two-thirds of the U.S. Internet search market is dominated by Google, although its market share dropped to 65.1 percent in March from 65.5 percent compared to February, according to ComScore Inc. in Reston, Virginia, one of the world's largest market research companies. Such plummeting figures reveal the largest monthly fall since January 2009. In terms of the competition, Microsoft Corp.’s Bing search engine had a modest increase of 0.2 percent up to 11.7 percent. Yahoo! Inc. also had a mediocre increase of 16.9 percent, from 16.8 percent after a six-month downward trend.

The Internet giant’s Chief Executive Officer Erick Schmidt’s promise to acquire a company a month in 2010 is above target, with six acquisitions already. Google has boosted their staff by 800 employees in the first quarter to a total of 20,621.