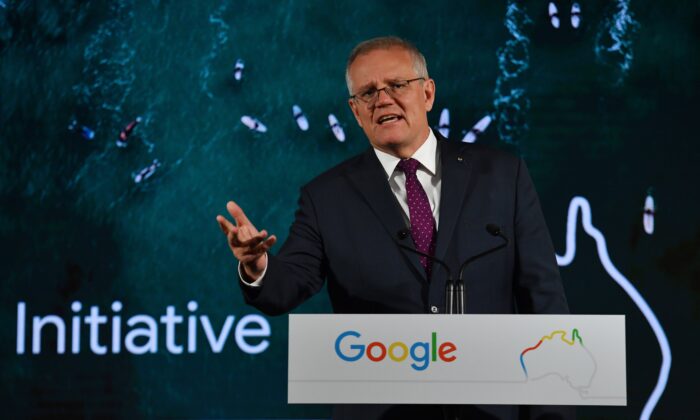 Google will invest AU$1 billion (US$734.2 million) over the next five years into the local Australian tech industry.

“Australia has helped shape Google itself, from early work on Google Maps to progress on Chromebooks, Photos, Payments, and Fitbit today,” Pichai said in a press release on Nov. 16.

“Partnerships like these will be at the heart of the Digital Future Initiative,” he added.

“We believe a strong digital future is one where everyone has access to technology and the skills to use it, where the internet economy fulfils its immense potential, and Australia’s long tradition of innovation can grow and thrive.”

Prime Minister Scott Morrison paid a visit to Google’s Australian head office in Sydney on the same day as the announcement and spoke of the importance of the digital economy for the country’s businesses.

“From the doctors conducting telehealth, the farmers operating drones, the restaurants taking orders and the tradies planning their week, through to our world leading fintech, regtech and medtech operators,” he said in his remarks.

“We believe passionately in Australia that entrepreneurship is actually what solves the world’s biggest problems, whether it’s realising the challenges of digital technology or indeed achieving what is needed to be achieved with low emissions energy into the future,” he added.

“Private capital investment, entrepreneurship, collaborating with the world’s best scientists and researchers and innovators. That’s what solves the problems, not taxes and regulation.”

However, the Australia Institute said it was important to “look behind the big numbers.”

“Google pays less than one percent tax on annual earnings of about AU$5 billion. Simply paying tax on Australian earnings would deliver far more money to Australia,” the institute said in a press release.

The group said it was important to understand whether more collaboration with Google would see the tech giant embed itself “deeper into government, business, and community.”

“When big tech offers to put money into a nation there are always strings attached,” said Peter Lewis, director of the Australia Institute’s Centre for Responsible Technology.

Google’s investment comes after an acrimonious, public dispute between the tech giant and the Australian government earlier this year over impending laws that forced the company to pay news publishers for content.

The Silicon Valley giant is also facing an ongoing five-year inquiry from the competition watchdog into its market dominance in Australia.

The Australian Competition and Consumer Commission (ACCC) is simultaneously probing Google’s activities in the App store space, its control of the digital advertising supply chain, and even whether consumers should have the choice to select non-Google-related search engines when they turn on their phone or PC.