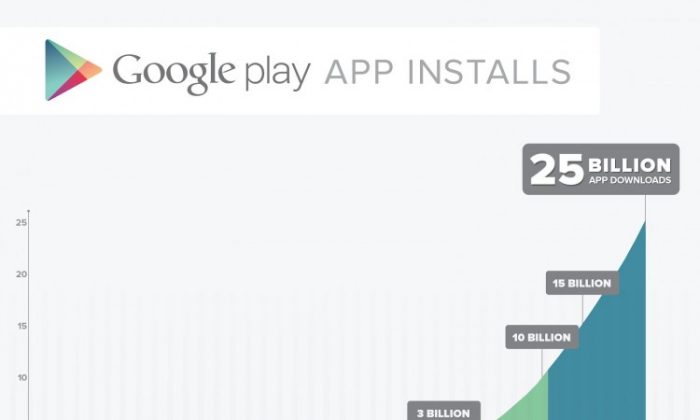 With that landmark, Google is catching up on its biggest mobile competitor, Apple’s benchmarks when it comes to app downloads. Google hit the milestone in 3 years and 11 months after launch–in contrast, Apple had hit the 25 billion earlier this year after 3 years and 8 months of App Store operation.

But not only is Google catching up in terms of app downloads, it is quickly catching up on total available apps… and according to some industry pundits, app revenue as well, something that it has long fallen behind on to the Cupertino-based iPad and iPhone maker.

But most importantly, Apple’s lead in terms of app revenue compared to Google’s Android may be narrowing.

A panel of mobile app payment providers suggested at GigaOm’s Mobilize 2012 conference that things were changing. Raj Aggarwal, CEO and co-founder of Localytics, said at the conference that “iOS’s lead, in terms of the minds of developers, is only slight right now.” Josh Williams, president and chief science officer at Kontagent, is reported to have said, “While Android monetizes a little less well on a per user basis than iOS, the acquisition costs on Android today are much lower on a per user basis. So sometimes profitability on Android is higher.”

Google announced a few weeks ago that over 1.3 million Android devices were being activated per day, and the total number of Android activations had exceeded 500 million devices. Google announced just this week that its Nexus 7 tablet and Google Play were now available in Japan, a large market.

The fight for the mobile marketplace may not be over yet, but its clear that Google and Apple are increasingly fighting for top spot in terms of all metrics measured, including app downloads and revenue.

In the meantime, for a short while, if you’re an Android user interested in apps, or are interested in getting a deal on some favorite music, movies and TV shows, Google Play’s 25 cent offers will go on for eight more days as the company celebrates the milestone with the world. The company is posting daily updates on its Google Plus page.