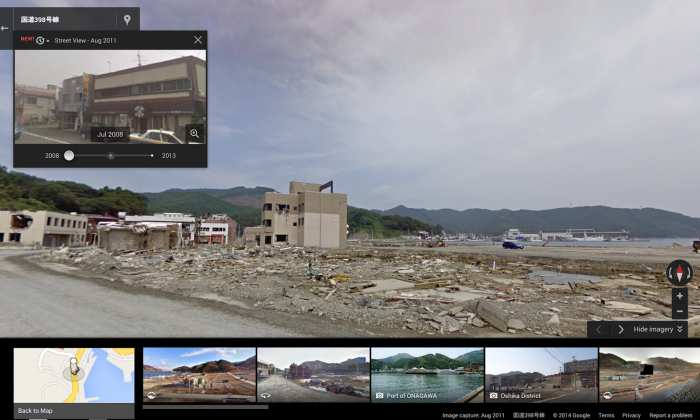 Google Maps Street View: How to See Locations From the Past With New Feature (+Photos)

Google Maps street view now has a feature that enables people to travel back in time.

Users can see different locations in their states dating back to 2007.

“Forget going 88 mph in a DeLorean—you can stay where you are and use Google Maps to virtually explore the world as it is—and as it was. Happy (time) traveling!” said Vinay Shet, product manager for street view.

The way it works is to keep an eye out for a clock icon in the upper left-hand portion of a treet view image. If you see one then click on it. A slider will enable you to move through time, and select a thumbnail to see the same place in previous years of seasons.

“As time goes by, many of these images are going to become vintage,” predicted Shet. “We want our maps to be comprehensive as we build a digital mirror of the world.”

Like everything else on Google’s map, the time-tripping option is free. Google makes money off itsmaps from advertising, so the Mountain View, Calif., company is constantly coming up with new attractions to keep people coming back.

Even though the photos only date back to 2007, some of them illustrate dramatic changes. Some photos show how neighborhoods in cities like Tohoku, Japan looked before and after a 9.0-magnitude earthquake struck in March 2011. Others show the gradual recovery of New Orleans neighborhoods in the years following the devastation of Hurricane Katrina. Scrolling over to Washington D.C. will provide a look at the restoration of the historic Howard Theatre in the nation’s capital.

In New York, the Street View map presents a string of photos illustrating the changing skyline as the Freedom Tower at the World Trade Center was built. Even looking at the evolution of Times Square during the past seven years can evoke nostalgic feelings while gazing at a giant billboard advertising a flip-style cellphone in 2007.

The visual retrospectives aren’t available throughout Google’s maps, although Shet says there should be at least one look back in time for just about every neighborhood that can be viewed through the Street View format.