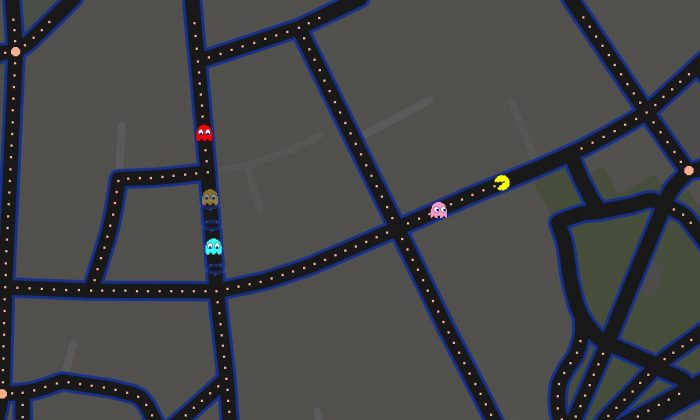 How Do You Play Pac-Man on Google Maps?

The Internet was abuzz on Tuesday that Pac-Man (the original, not Mrs. Pac-Man) can be played via Google Maps. Here’s how to access it: Go to Google Maps and then go to the bottom-left section of the map and you should see a box with Pac-Man. You can go to a random location in Google Maps, and it likely won’t let you play Pac-Man there, so click “I’m feeling lucky,” and you’ll be transported to a random spot.

Obviously, being able to play Pac-Man on the maps of major cities is a cool feature, but it isn’t perfect. It’s really hard to control.

I was really, really trying hard to catch Pac-Man fever, but when playing in New York City, I found that it’s really hard to navigate Pac-Man around. I got “stuck” on a diagonal road at one point and was destroyed by a ghost. In Rome, again on a diagonal path, it was unclear if I should press “up” or “left.” I got stuck again.

Later, in another city, an especially big road had two rows of dots, making it near-impossible to complete the map.

A colleague of mine agrees: It’s too clunky and unresponsive. If I wanted to play Pac-Man, there’s plenty of other places I could go get my fix. (Or maybe I’m just bad at Pac-Man?)

All in all, I could play it for more than a about a minute. (Maybe I just have a poor attention span?)

It’s unclear why Google rolled out the Pac-Man feature, but it might have to do with April Fools’ Day on Wednesday.