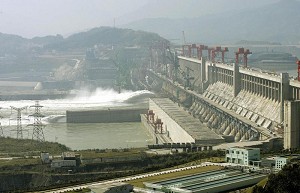 Social media users in China have been circulating two Google aerial photos comparing the Three Gorges Dam in 2009 and 2018. The comparison clearly shows that the dam has warped during those 10 years, which suggests serious structural weakness.

The state-owned dam operator issued a statement on July 8 to address netizens’ concerns. The statement said that the dam was safe. But since July 5, the company has closed off the dam for visiting tourists.

Amidst the concerns about the structural integrity of the Three Gorges Dam, Chinese leader Xi Jinping made a statement last year about the need to restore the Yangtze River’s ecological system and to forbid “destructive development” projects.

Planned since the 1950s, the massive project was strongly opposed by hydraulic engineers for decades. However, former Chinese leader Jiang Zemin rushed to start the project in 1997 by forcibly passing the proposal at the National Congress. Upon completion in 2009, not a single top-level official from Beijing attended the ceremony. To this day, the final inspection and acceptance report has not been signed off by the project inspection committee.

So, should a catastrophic event take place at the Three Gorges Dam, with no final project sign-off, who’s going to take the blame?

On April 24 – 25, 2018, Xi inspected the Three Gorges Dam and the surrounding cities and towns. While presiding over a forum on ecological restoration in the area, he stated, “We must make it a priority to restore the Yangtze River’s ecological system” and that “destructive development must be forbidden.”

This is also the first time a Chinese top leader has visited the Three Gorges Dam since 1997 when Jiang Zemin and Li Peng attended the damming ceremony.

From the beginning, the Three Gorges Project has been controversial and highly politicized. Many scientists and engineers who criticized the Three Gorges Dam project were sent to labor camps during the time period when Mao Zedong and Deng Xiaoping led the country (around 1949 to 1992).

Huang Wanli, a prominent hydrologist who had served time in a labor camp, spoke out against the project in 1989, according to a report by Independent Chinese PEN Center. At the time, Jiang Zemin rose to the Communist Party’s top leadership position by supporting Deng Xiaoping’s decision to crush the Tiananmen student democracy movement (in June 1989).

Huang, a graduate of Cornell University in 1935 and the University of Illinois in 1937, was an 86-year-old professor emeritus at Qinghua University at the time. In the six petitions he wrote to Jiang, he warned that the dam was a disastrous project that would cause great numbers of deaths and massive destruction in the upstream areas of Sichuan Province. Huang even predicted that, eventually, the dam would have to be exploded and demolished.

However, Jiang was eager to consolidate his power by showing-off some outstanding political achievements. He formed an alliance with then-premier Li Peng, and these two top leaders pushed the proposal to build the dam through the National People’s Congress. Eventually, the project was launched amidst strong controversy.

Li must have deeply regretted his involvement. In February 2012, People’s Daily published an article that allegedly quoted Li’s meeting minutes from earlier years, pointing to the fact that Li was not a decision maker in the dam project. The article stated that Deng Xiaoping had previously approved the Three Gorges Dam project before 1989, and after that year, all major decisions regarding the project were made by Jiang Zemin.

Wang Weiluo, a Chinese hydraulic engineer residing in Germany, wrote an article on Jan. 31, 2018, asking a big question: “Why did [Chinese vice-premier] Wang Yang never sign off the final inspection and acceptance report for the Three Gorges Dam?”

According to the article, Wang Yang assumed the role of director of the Completion Acceptance Committee of the Three Gorges Dam Project on June 25, 2014. He was also China’s premier at the time.

At the first plenary meeting of the Final Inspection Committee, Wang Yang emphasized that “everyone must be highly responsible to our nation, to the people, and to future generations when conducting the final inspection work.”

Moreover, one of the hydraulic structure experts from the inspection team, Chen Qunhou, told Chinese media that the inspection work would be completed by the first quarter of 2016, and the team promised there would be no delay.

“However, two years have passed, why is it that Wang Yang hasn’t yet completed the ‘Final Inspection and Acceptance Report’ for the Three Gorges Dam project?” Wang Weiluo asked in his 2018 article.

Some analysts have opined that Wang Yang’s position as director of the Completion Acceptance Committee is a thankless job that involves huge responsibilities. Therefore, when the team finds problems, the best approach for Wang Yang is to try his best to procrastinate.

Currently, Wang Yang is one of the 7-member Chinese Communist Party’s (CCP’s) Politburo Standing Committee, and head of the Chinese People’s Political Consultative Conference (CPPCC), a political advisory body. He is considered the fourth-most-powerful Chinese politician.

The Three Gorges Project proposal was passed in 1992. Construction officially began in December 1994 and was completed in 2009. Damming the Yangtze River in southwestern China impacted many lives—the project required over 100 nearby cities to be flooded and more than 1.2 million people to be relocated, according to various Chinese media reports.

In addition, since the dam was completed, abnormal climate changes and natural disasters are frequently seen in the middle and lower reaches of the Yangtze River, such as droughts, floods, and earthquakes that have rarely occurred in Sichuan Province. It has also brought about numerous ecological disasters, such as water pollution, landslides caused by rising water levels, expansion of the reservoir’s inundation area, restrictions on Yangtze River transportation, disappearing historical sites, death and extinction of rare aquatic animals, according to Chinese news portal Sina.

The project also resulted in millions of peasant migrants who were left with no land, no jobs, and no future, causing a huge social crisis.

Even Chinese state-run media occasionally admit that the Three Gorges Project may have been a huge mistake. An April 2012 article by Chinese financial magazine Caijing pointed out that the project had not only exhausted huge sums of state funds, but also caused a great many problems.

What is particularly noteworthy is that for such a gigantic construction project, not a single top-level Chinese official attended the completion ceremony in 2009.