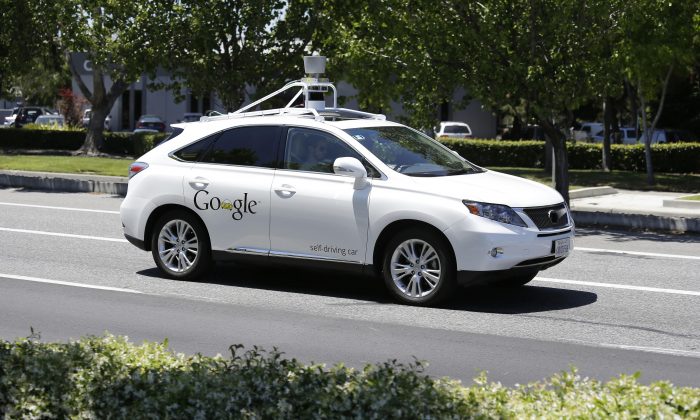 A Google self-driving car goes on a test drive near the Computer History Museum in Mountain View, California on May 13, 2014. (AP Photo/Eric Risberg, File)
Tech

How long before self-driving cars are made available to the consumer? Although Google, the company at the forefront of the field, hasn’t set a formal timeline, Google’s self-driving car project lead, Chris Urmson, set 2020 as an aspirational deadline—the year his son would turn 16.

Google releases monthly updates about its fleet of self-driving vehicles being tested, and in the August edition it states that “Urmson’s goal is to make sure his 11-year-old son doesn’t need to get a driver’s license.”

Since 2009, Google’s self-driving cars have collectively covered more than 1.15 million miles in autonomous mode, and have averaged more than 10,000 miles per week on public roads.

In the current phase of testing, Google is collecting community feedback from the drivers and pedestrians who interact with its self-driving vehicles, and the company is already drawing up plans for a pilot program where the general public gets to try out its prototypes.

Google has long tested its cars near its headquarters in Mountain View, California, but it recently expanded to areas “far from Silicon Valley” to see what it can learn from different environments.

“We’ve had to learn how to handle new types of street infrastructure, like horizontal traffic signals,” the report reads. “But on the whole, in terms of how the cars operate, there’s far more that’s similar than different.”

One accident was reported in August, bumping up the total number of accidents in Google’s five years of testing to 16. Google’s car was near an intersection when a pedestrian was crossing, forcing the human pilot to manually break, and a vehicle rear-ended Google’s test car. Google claims that of the 16 accidents, not a single one was due to the fault of its self-driving system.

Although a human pilot was responsible for stopping Google’s car from running into the pedestrian, a later analysis of the incident indicates that the decision wasn’t necessary. Google’s self-driving system keeps a record of its own decisions, including how the car would have acted on its own in the accident. In this case, the autonomous system would have left less margin for error than the human pilot.

“If the car had been left to operate autonomously, it would have stopped safely in front of the crosswalk—great. Intriguingly, though, it would have braked slightly less hard and traveled a bit closer to the crosswalk before stopping,” the report states.

The report doesn’t state whether the accident could have been avoided if the human driver had not taken over, since the self-driving system would leave more space for the vehicle that rear-ended Google’s car to come to a stop, but it does suggest that autonomous systems are better than humans at optimizing the amount of space to leave between pedestrians in front and vehicles behind.