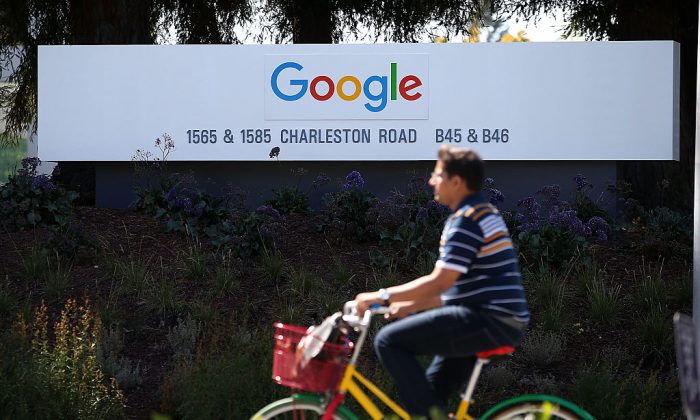 The Google logo on a sign outside of the Google headquarters on Sept. 2, 2015 in Mountain View, California. (Justin Sullivan/Getty Images)
Tech

Google has fired the engineer who wrote an internal memo questioning restrictions on free speech in the company’s offices and who suggested promoting diversity through different means other than by discrimination.

James Damore, a software engineer at Google, told Bloomberg on Monday, Aug. 7, that he has been fired. He is “currently exploring all possible legal remedies.”

Damore’s 10-page plea for an honest and rational discussion about the software giant’s diversity policies became the subject of an internet firestorm over the weekend.

Google openly discriminates in favor of women in its hiring practices because the company has more male engineers and wants to appear more inclusive. Damore pointed out that the discrepancy may be partly the result of biological factors and fundamental differences between men and women.

He suggested diversity could be improved by accommodating such differences, making Google a workplace women would seek on their own, rather than by discriminatory hiring policies, which could lead to legal repercussions.

Such speech, according to a memo by Google’s Chief Executive Officer Sundar Pichai, is in violation of the company’s Code of Conduct because it advances “harmful gender stereotypes.”

Damore’s firing strengthens his  larger point of widespread discrimination permeating Google’s workplace culture, where only left-leaning ideological views are tolerated, while employees with conservative viewpoints are shamed and intimidated into silence.

“I’ve gotten many personal messages from fellow Googlers expressing their gratitude for bringing up these very important issues, which they agree with but would never have the courage to say or defend because of our shaming culture and the possibility of being fired,” Damore wrote shortly after his memo went viral.

The culture of snuffing out opinions outside of a “politically correct” spectrum, while claiming an openness to a diversity of opinion is prevalent in a large swath of the tech industry. Tech giants Twitter, Facebook, Youtube, AirBnB, and even smaller companies like Patreon and Mozilla, have all taken steps similar to Google’s to silence free speech in the name of political correctness.

The term “political correctness” first came to use in communist regimes in the 1930s. In the United States it has since evolved into a favored tool of the left-leaning political spectrum: socialists, democrats, progressives.

It’s been criticized for shutting down not only discussion, but also reflection on important topics.

“Political correctness is meant to forbid you from thinking. That’s what it is—it’s fascism of the mind. The theory being if you can’t say it, you won’t think it,” said Michael Walsh, a journalist and novelist, and author of “The Devil’s Pleasure Palace: The Cult of Critical Theory and the Subversion of the West.”

“Do you understand that at this point, I could not in good conscience assign anyone to work with you?” Zunger wrote. “I certainly couldn’t assign any women to deal with this, a good number of the people you might have to work with may simply punch you in the face, and even if there were a group of like-minded individuals I could put you with, nobody would be able to collaborate with them.”

Confirming Damore’s concern that his views will be misrepresented, Zunger accused him of considering (or suspecting) his female co-workers “biologically unsuited to do their jobs.”

But Damore explicitly stated that his point about innate differences can only help explain unequal representation overall and can’t be applied to individuals.

“Many of these differences are small and there’s significant overlap between men and women, so you can’t say anything about an individual given these population level distributions,” he wrote. “Reducing people to their group identities and assuming the average is representative ignores this overlap (this is bad and I don’t endorse this).”

“I found that it advanced incorrect assumptions about gender,” she wrote in a memo to all staff.

“I’m not going to link to it here as it’s not a viewpoint that I or this company endorses, promotes, or encourages.”