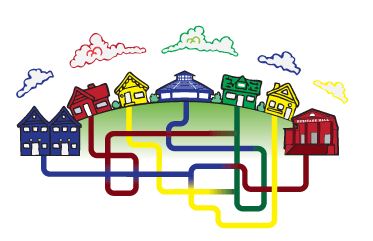 An illustration of how Google Fiber is set up. (kirklandwa.gov)
Tech

Google Fiber involves laying down fiber-optic cables and connecting the bigger system to individual homes, for internet connections with speeds of up to 100 times faster than today’s average broadband, including a high definition television signal.

“We are delighted to partner with Google to bring this cutting edge fiber-optic system to the Grandview community,” said Grandview Mayor Steve Dennis in a statement. “We’re thrilled to be able to provide this unique innovation opportunity for our citizens, school district, and home-based businesses.”

Google Fiber started building the first network in Kansas City, KS in 2011, and has since announced expansion to four other Kansas cities. After rolling the system out in Kansas City, MO, Grandview will be the fourth city in Missouri to get the super-fast network. Austin, Texas, and Provo, Utah, also announced that they’re in line to get the system.

Pricing in Kansas City includes a web-only internet plan for $70 a month and an internet plus Google Fiber TV for $120 a month.

The process works through the respective City Councils voting to bring Google Fiber to their cities and working with Google to get it set up.