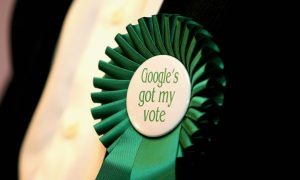 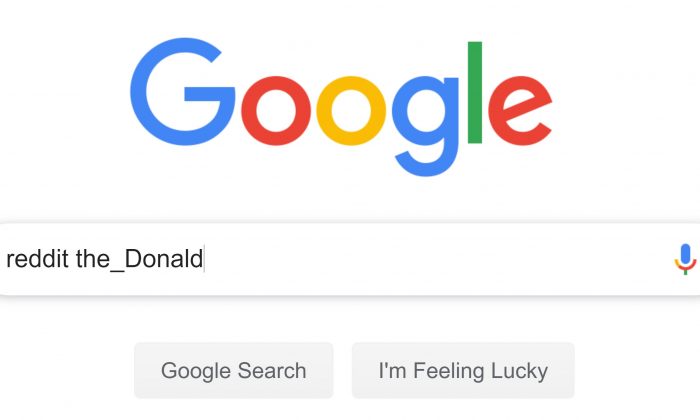 Google search page with the words "reddit The_Donald" typed in on May 3. 2019. (Screenshot via Google)
US News

Users of the Reddit social media site have noticed that the Reddit fan club of President Donald Trump was quite difficult to find on Google, but not on other search sites. However, rather than fixing the issue, Google appears to have doubled down, making the fan club—/r/The_Donald—even harder to find.

As The Epoch Times reported in April, if one searches the words “Donald Trump” and “Reddit” together on a number of internet search engines such as Yahoo, Bing, and DuckDuckGo, one finds that the top spot in the results is r/The_Donald—possibly the largest and most active Trump fan club on the internet with some 740,000 subscribers.

Making the same search on Google, however, didn’t surface the link to The_Donald at all, or at least not on the dozens of pages of search results The Epoch Times staff browsed through.

A Google official, responding on the condition of anonymity, had at the time denied the company took any action to impact the ranking of the page and said Google didn’t remove it from its page index. The page still appeared high in the results, the official said via email, when one looked for it more specifically, such as by searching “The_Donald” or “/r/The_Donald” or “reddit The_Donald.”

Since then, however, Google seems to have further suppressed The_Donald as searching the words “reddit The_Donald” doesn’t surface the page anymore.

Reddit user Trolling_Rolling pointed to the change in a May 3 post. “I did this two weeks ago and ‘The_Donald’ turned up 5th on the search return. It no longer is on the front page,” he or she said.

The Epoch Times’ previous article pointing to Google’s suppression of the subreddit, as compared to other search engines, was the 7th top result for the phrase “reddit The_Donald.”

Google didn’t respond to a request for comment on the latest change.

Internal Google materials reportedly revealed a mechanism called “fringe ranking” that was explained as “not showing fake news, hate speech, conspiracy theories, or science/medical/history denial unless we’re sure that’s what the user wants.”

Google software engineer Paul Haahr worked on the mechanism, according to his bio on Google’s internal network Moma, which was quoted in an April 9 Daily Caller report.

Google didn’t respond to questions on whether “fringe ranking” was applied to r/The_Donald. But left-leaning press has repeatedly accused the page’s users of being “hateful.”

The_Donald was created in June 2015 after Trump announced his candidacy. It describes itself as “a never-ending rally dedicated to the 45th President of the United States, Donald J. Trump.”

Aside from supporting the president, it also focuses on criticizing and ridiculing Trump’s opponents, particularly leftist politicians, celebrities, and media. Its users’ humor and commentary is at times insulting, inaccurate, and/or speculative.

While online platforms, in their rhetoric, have uniformly pledged to support free speech, in practice they’ve been moving away from it, according to a Google internal research document dated in March and later leaked to Breitbart.

The document, titled “The Good Censor,” argues the “tech firms have gradually shifted away from unmediated free speech and towards censorship and moderation.”

Internal Google materials leaked to the media have indicated that the company manually tweaks search results on topics it deems “controversial.”

While Google products, including YouTube, mostly rely on algorithms to shape search results, the company also engages in manual interventions, according to Daniel Aaronson, senior strategist for the Trust & Safety Product Strategy department at Google Search.

“In extreme cases where we need to act quickly on something that is so obviously not okay, the reactive/manual approach is sometimes necessary,” he said in an internal discussion thread leaked to Breitbart.

This account appears to conflict with the Dec. 11 testimony of Google CEO Sundar Pichai to the House Judiciary Committee.

“We don’t manually intervene on any particular search result,” he said.

In response to Breitbart’s inquiry, a Google spokesperson said: “Google has never manipulated or modified the search results or content in any of its products to promote a particular political ideology.”

Google also maintains a blacklist for pages that violate its “misrepresentation” and “good neighbor” policies. Such pages then don’t show in the News and other infoboxes on the search result pages, The Daily Caller reported.

Google doesn’t appear to provide any public explanation of how a page ends up on its blacklist or how online publications like The American Spectator and Conservative tribune reportedly ended up on it when there seems to be no indication either has broken Google’s content policies for news publishers.

“We do not manually determine the order of any search result, nor do our algorithms or policies attempt to make any judgment on the political leanings of a website,” a Google spokesperson said in an emailed statement in response to The Daily Caller report.

Correction: A previous version of this article incorrectly listed Brave as a search engine. Brave is a web browser. The Epoch Times regrets the error.