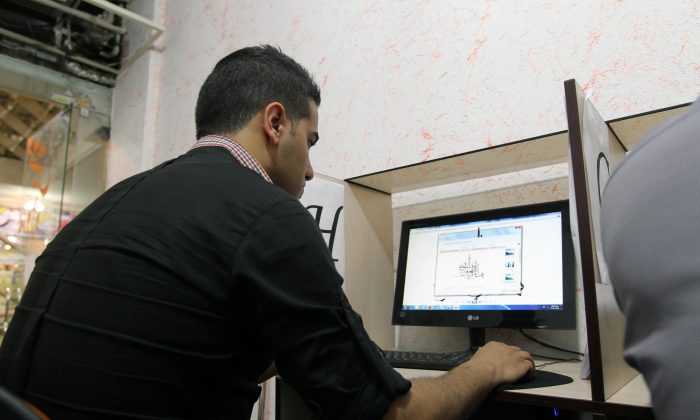 An Iranian uses a computer at a cybercafe in the center of the Iranian capital Tehran on May 14, 2013. Iran tightened control of the Internet in the run up to the presidential election, mindful of violent street protests that social networkers inspired last time (Atta Kenare/AFP/Getty Images)
Middle East

Google has picked up a significant spike in hacking attempts in Iran, running up to the presidential election on 14 June.

“For almost three weeks, we have detected and disrupted multiple email-based phishing campaigns aimed at compromising the accounts owned by tens of thousands of Iranian users,” said Google’s vice-president of security engineering, Eric Grosse, said in an official blog.

“The timing and targeting of the campaigns suggest that the attacks are politically motivated in connection with the Iranian presidential election on Friday,” he said.

The phishing campaign uses emails to try to draw users to a fake website.

“Users receive an email containing a link to a web page that purports to provide a way to perform account maintenance. If the user clicks the link, they see a fake Google sign-in page that will steal their username and password,” said Grosse.

Google says the attacks appear to come from the same group that attempted to conduct attacks in 2011 from within Iran using SSL certificates.

The reformist opposition says that the six month run up to the 2009 election saw 80 of its supporters killed, with several sentenced to death.

The two candidates with a reformist agenda from the 2009 election remain under house arrest.

Last minute twists and turns in the electoral race appear to have put moderate cleric Hassan Rouhani ahead of the pack, as some withdrew from the race and allegiances shifted.

His five remaining opponents are four conservatives and a hardliner.