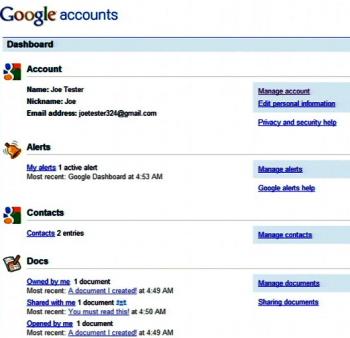 Screenshot of the Google Dashboard, a new service to provide a list of Google accounts and the recently stored data. (Google Inc)
News

By Peter Sedik
Print
Google announced a new service on Thursday called Google Dashboard which allows a Google user to see a summary of products and data stored under one's personal Google account.

Google Dashboard is basically a list of the Google services that the user has subscribed to with his or her account, as well as information associated with that account.

More than 20 of Google's most popular services are listed in the Dashboard, including Gmail, Google Calendar, Picasa Web Albums, and Youtube.

The new service is regarded by many as a step to alleviate the criticism regarding the privacy concerns related to Google's collecting a large amount of data about its users and their online behavior and activities. Google Dashboard allows a user to, in one place, view recent search history, visited links, videos watched on Youtube or recently messaged contacts.

Google Dashboard is a good start for Google users to see at a glance which services they are subscribed to, as well as their recent activity on those.

Google Dashboard could be enhanced in the future to allow for exporting or importing of the user data or the whole service account. The Data Liberation Front, which describes itself on its website as "an engineering team at Google whose singular goal is to make it easier for users to move their data in and out of Google products," seems ready to provide these features.

Google Dashboard can be accessed on the link http://www.google.com/dashboard.