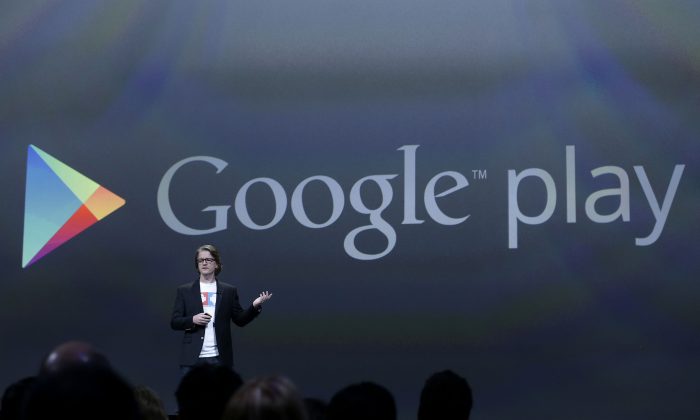 Chris Yerga, VP of Google Play Engineering, speaks at a Google event in 2013 in San Francisco. Google is planning to launch a version of its Google Play app store in China, which likely will require the company to censor certain apps. (AP Photo/Jeff Chiu)
China

After a five-year hiatus, Google Inc. is contemplating a return to China.

The company plans to launch a version of Play Store for China, in an effort to take advantage of a smartphone market with 79 percent market share for Android. The debut is expected to coincide with release of Android 6.0 Marshmallow in the fall. The Information, a technology news website, first reported Google’s deliberations on Sept. 4.

It’s an about-face for Google, which decided to exit the Chinese market in 2010 after years of concerns over censorship and security. The final straw came after the Chinese Communist Party (CCP) orchestrated cyberattacks aimed at dozens of U.S. companies including defense contractors, financial organizations, and technology firms such as Google. At the time, Google’s bold decision was viewed with admiration by shareholders and other companies.

Does Google’s return to China invalidate the goodwill it received five years ago?

To understand Google’s rationale today requires more context. While Google developed Android, the Android Open Source Project dictates that OEMs may freely use its operating system on their hardware without a licensing fee.

So how does Google make money from Android? It does not monetize Android directly. By creating Android, Google put the Web (and its Web-connected services) into more people’s hands. And that has lead to more mobile Web searches, more use of Google services like Gmail and YouTube, more clicks, and more ad revenue for Google.

Another revenue stream is app sales from the Play Store, from which Google keeps between 25 and 30 percent of each transaction, according to estimates polled from online developers.

Android’s global market share was 16.3 percent in September 2010, and as of June 2015 it stood at 82.8 percent, according to market research firm IDC. Today there are around 700 million active users of smartphones and tablets in China, and Android has 79 percent market penetration in China as of July 2015, according to consumer research firm Kantar Worldpanel.

That’s a lot of revenue on the table—but Google gets almost nothing. Chinese Android devices run altered versions of the Android software without Google services, because the company has neither a Web search presence, nor an app store there. China’s biggest third-party Android app stores include Baidu App Store, Tencent App Gem, and Taobao Mobile Assistant.

In other words, Google has essentially watched from the sidelines as China’s technology market has ballooned to proportions it can no longer ignore.

Google co-founder Sergey Brin was instrumental in the 2010 decision to exit China. But Brin recently stepped back from the daily operations of the company while product head Sundar Pichai is taking over as CEO from co-founder Larry Page. The company is also in the middle of restructuring and rebranding itself as Alphabet.

Pichai always had the Chinese market in his sights.

“Android is powering a lot of innovation in China. That’s important to me. … So I don’t think of China as a black hole,” Pichai told Forbes in an interview in February. “I see it as a huge opportunity in which we are playing as an enabling platform today and hopefully we have a chance to offer other services in the future.”

Going back to China means Google will need to begin censoring again, albeit in a slightly different capacity than before.

The Play Store will not offer apps that the CCP doesn’t approve, so foreign news apps will likely be unavailable. Unlike the the regular Play Store, Google does not plan on selling media such as movies, music, or books in China.

Google, which has no control over the content within apps downloaded from the Play Store, sees this as more palatable than censoring individual search content.

Currently, the Chinese Android app market is highly fragmented, with around 10 platforms of similar importance.

If Google re-enters China with its own app store as expected, Chinese technology giants such as search engine Baidu, social-networking firm Tencent Holdings, online shopping portal Alibaba (which owns Taobao), and hardware manufacturer Xiaomi, will have a formidable and deep-pocketed foe to contend with.

Going back to China means Google will need to begin censoring again, albeit in a slightly different capacity than before.

Commercially, entering China could be a game changer, especially in the long term.

At the moment, Google will need to play by the rules of the CCP. But given recent political infighting within the party and an increasing amount of social unrest, it’s possible that those rules could change. If economic stagnation sets in, and the Party loses its basis for public support, anything may be on the table. For Google, re-entering China could be seen as a long-term investment.

Some estimates suggest that Google generates approximately 3 to 4 percent of its revenue from app-related fees, without any China presence.

If Google properly markets the Play Store in China and receives a level playing field, income from app sales could have a material impact on Google’s revenues going forward.