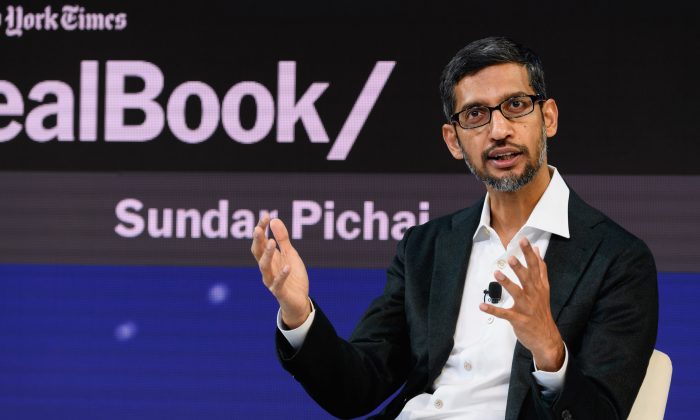 Google CEO Pichai to Testify in Congress on Bias in Filtering

Sundar Pichai, chief executive of Google, will testify to Congress on the company’s practices of “filtering” data.

“The hearing will examine potential bias and the need for greater transparency regarding the filtering practices,” the House Judiciary Committee stated in a Nov. 28 release, scheduling the hearing on Dec. 5.

“Americans put their trust in big tech companies to honor freedom of speech and champion open dialogue, and it is Congress’ responsibility to the American people to make sure these tech giants are transparent and accountable in their practices,” Committee Chairman Bob Goodlatte (R-Va.) said in the release.

The committee has held three hearings on social media filtering practices since April, probing tech giants such as Google, Facebook, and Twitter for ideological bias. This will be the first one, however, with only a single witness.

Pichai can expect questions on two major concerns of the Republican-led committee: suppressing conservative voices and bowing to Chinese censorship.

More than 90 percent of the world’s internet searches go through Google.

“Its business practices may have been affected by political bias. Additionally, reports claim the company is compromising its core principles by complying with repressive censorship mandates from China.”

Google has faced a bipartisan storm since details leaked about its secretly developing a censored search app for the Chinese market. Lawmakers, human rights advocates, and even some 1,400 of its own employees protested the project. Most recently, on Nov. 27, 11 Google engineers and managers published an open letter demanding that the company end the clandestine project, named “Dragonfly.”

Google representatives stated that Dragonfly was not close to launching, but refused to provide any details regarding the project.

The Chinese communist regime runs the world’s most sophisticated system of internet censorship, employing tens of thousands of people to manually delete or promote content according to the party line.

The regime requires foreign companies to censor topics it deems “sensitive,” such as democracy, human rights, and the ongoing persecution in China of Falun Gong practitioners, underground Christians, human rights activists, and others. Companies are also forced to share with the regime any of their data stored in China.

In recent years and especially since the 2016 presidential election, Google has faced criticism for favoring left-leaning sources in search results.

President Donald Trump accused Google of shutting out “Republican/Conservative” and “Fair Media” from Google News searches in an Aug. 28 tweet.

“Very dangerous,” he said, in a subsequent tweet. “Google & others are suppressing voices of Conservatives and hiding information and news that is good. They are controlling what we can & cannot see. This is a very serious situation-will be addressed!”

Trump’s tweets came after PJ Media reported that among the top 100 search results for “Trump” on Google News, 96 percent of them were from left-leaning media.

The Epoch Times conducted a similar experiment on multiple dates, each time reaching a similar result. Most recently, in the afternoon of Nov. 28, some 97 percent of the 154 articles featured on the first 10 pages of search results for “trump” came from traditionally left-leaning media.

After Trump’s 2017 executive order on immigration, also known as the travel ban, some Google employees discussed methods to tweak Google search-related functions to counter the order, according to leaked emails reported by The Wall Street Journal.

Google has denied political bias in search results, saying the employees were brainstorming, and that their ideas weren’t implemented.

Former Google engineer James Damore pointed out in a 2017 internal memo (pdf) that the company had a “culture of shaming and misrepresentation” which was “disrespectful and unaccepting of anyone outside its echo chamber.”

He said the company was so left-leaning that it was blind to at least some of its biases.

Pichai called Damore’s views “offensive” and fired him after Damore suggested in the memo that Google had trouble hiring women to tech and leadership roles partly because the jobs catered more to the aptitudes and proclivities that are generally more prominent among men. Damore had proposed tweaking the jobs so they would be more inviting to women, rather than discriminating against men in hiring.