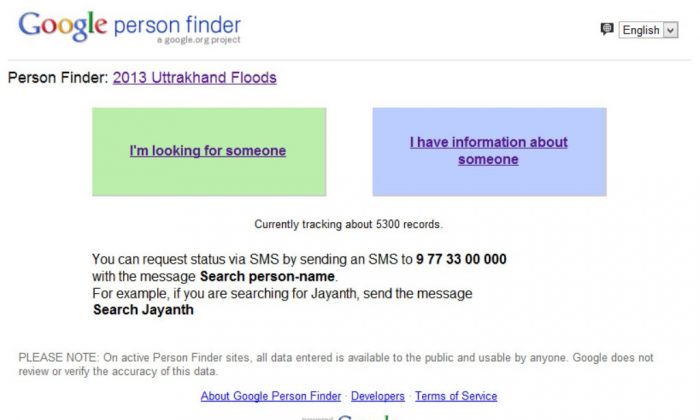 A screenshot of the Person Finder application launched by Google to offer information aboutpeople missing in the Uttrakhand Himalayan floods. (Epoch Times)
India

In the wake of massive floods in the Indian Himalayan region , Google has launched an application named “Person Finder” to offer information on missing persons.

Thousands are reported missing, while 22,000 are still stranded due to flash floods and cloud bursts that happened last weekend in Uttrakhand region of the India.

“Since last week, the state of Uttarakhand in India has been grappling with severe floods. Given that most of these areas in the state are highly inaccessible with intermittent communication, Google Crisis team brings you the Person Finder,” said Jayanath Mysore, the senior product manager of Google Asia-Pacific , in a blog post.

Google’s Person Finder is a web application that allows individuals to post and search for the status of relatives or friends affected by a disaster. Available in English and Hindi, the application can help trace missing people in flood-affected regions of Uttarkhand.

All information entered into Google Person Finder is publicly searchable. The program also allows press agencies, non-governmental agencies, and others contribute to the database and receive updates by using the web-app based on People Finder Interchange Format (a widely used open data standard for information about missing or displaced people).

Person Finder tool was earlier activated by Google in the aftermath of Boston Blasts, during the Haiti earthquake in 2010, and in 2011 when Japan was hit by a massive earthquake, measuring 8.8 on the Richter scale.