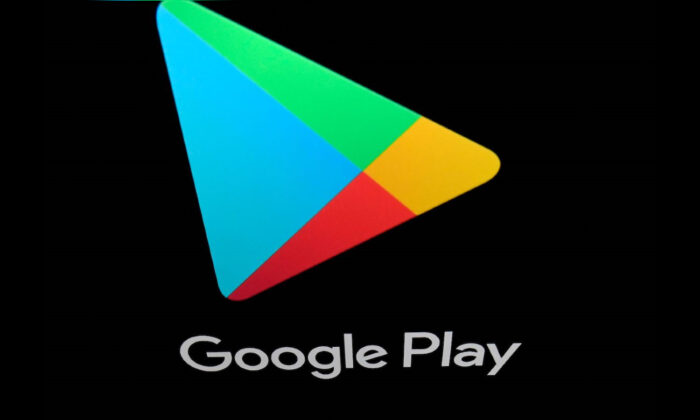 The logo Google Play displayed on a tablet screen in Paris, on April 19, 2018. (Lionel Bonaventure/AFP via Getty Images)
UK

Google “unfairly and excessively” charges people for digital purchases in its Play Store, a new legal action brought against the tech giant in the UK claims.

The action is seeking damages of up to £920 million ($1.284 billion) on behalf of 19.5 million Android phone users in the UK, claiming the 30 percent cut Google takes from digital purchases means consumers are being overcharged while also shutting down competition.

The case follows a similar action being launched against Apple in May and accuses Google of breaching UK and European competition law.

The claim has been filed with the Competition Appeal Tribunal in London by former Citizens Advice digital policy manager Liz Coll.

It argues that Google requires pre-installation and prominent placing of its Play Store on phones and tablets using its Android operating system, which stifles competition as the majority of UK users rely on the store for access to apps and other digital items.

Furthermore, by driving people to the Play Store, where Google processes transactions through its own payment system and takes a 30 percent service charge on digital purchases, the company was generating “massive and rising” profits through an “unlawful and unearned tax,” the claim says.

Google has recently cut its service charge to 15 percent for the first one million U.S. dollars of revenue a developer earns each year, which the tech giant says will see charges halved for almost all of the developers on the platform.

“Google has done a great job in opening up access to all the benefits of smartphones for millions of people, including me, in the UK,” Coll said.

“But while it claims to be an open system offering choice, in reality, Google has shut out competition and locked consumers into its own app store and its own payment system.

“Google created the Android app marketplace and controls it with a vice-like grip. Customers are herded towards the Google Play Store, and once there have no option but to pay a 30 percent fee whenever they buy an app or make an in-app purchase.

“Competing app stores, which could give the same service at a fraction of the price, never get a look in.

“Google is a gatekeeper to so many digital services, and it has a responsibility not to abuse that position and overcharge ordinary consumers.

“These hidden charges are unlawful, and Google’s customers deserve compensation and better treatment from Google in future.”

In response, a Google spokesperson said: “Android gives people more choice than any other mobile platform in deciding which apps and app stores they use—in fact most Android phones come preloaded with more than one app store.

“We compete vigorously and fairly for developers and consumers—97 percent of developers on Google Play don’t pay any service fee at all, which means their apps are free to consumers.

“Less than 0.1 percent of developers are subject to a 30 percent service fee and only when they’re earning over one million dollars—that fee is comparable with our competitors and allows us to constantly reinvest in building a secure, thriving platform that benefits everyone who uses it.

“This lawsuit ignores the benefits and choice Android and Google Play provide as well as the competitive market in which we operate.”

The new legal claim is the latest incident in an ongoing row targeting both Google and Apple and claims their policies and management of app stores are anti-competitive.

Last month, the Competition and Markets Authority (CMA) announced an investigation into the two companies and their services over concerns they have too much power and harm other businesses, while the two firms have also been the subject of legal action in the United States on the issue.