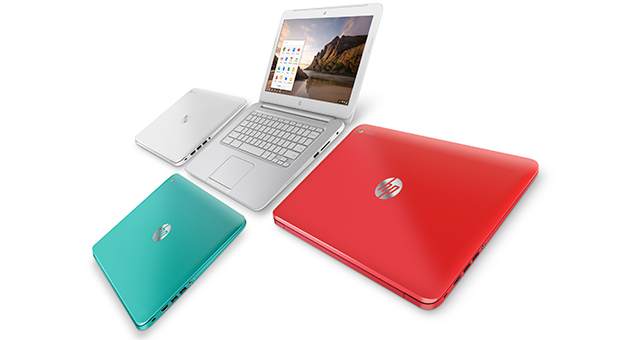 Partnering with Google and Intel, HP announced its new 14-inch Chromebook in a variety of colors. (HP)
Tech

The announcement was made during a keynote at the Intel Developer Conference this week, with PC manufacturers Acer and HP both announcing new Chromebooks. Google also announced the new Chromebooks on their blog, noting that over 5,000 schools in the United States have deployed Chromebooks for their students. HP’s new Chromebooks are reported to come in a variety of colors and will be priced at $299.

Chromebooks are laptops running Google’s mostly open-source Chrome OS, which is mostly a web-browser based operating system based on Google’s own Chrome browser and the Chrome ecosystem of apps. While initial reviews of the Chrome OS widely panned it for being “just the browser”, Chromebooks seem to have been proving their point in sales: research firm NPD Group said that Chromebooks accounted for 20% to 25% of sales for the sub-$300 budget laptop market. Samsung’s $249 Chromebook has been on the top of sales charts for laptops on Amazon for several months now.

And long-term Microsoft ally, Acer, had some strong opinions about Windows versus Chrome OS. In an interview with Bloomberg in January 2013, Acer President Jim Wong said that “Windows 8 itself is still not successful” and that Acer’s low-cost Chromebook accounted for between 5% to 10% of Acer’s US sales with promotions that were “not as broad as Windows 8.” Uh oh.

And for Intel, the new Chromebooks represent a comeback and a fresh attempt to enter the low-end market which has been dominated by British firm ARM Holdings, whose low-cost and low-power CPU designs are featured in most smartphones, tablets and now low-end laptops (including Chromebooks.) Intel’s new architecture is supposed to allow for twice the power savings while being faster than the previous generation of Intel processors.

Despite its low cost and apparent popularity though, Chrome OS is still barely a blip on most web statistics counters: could it be because most Chromebook users tend to use Google services more than any other service or website? In either case, PC manufacturers and the market seem to be experimenting with the Chromebook and its cloud-based operating system, and only time will tell whether it will be a true success.