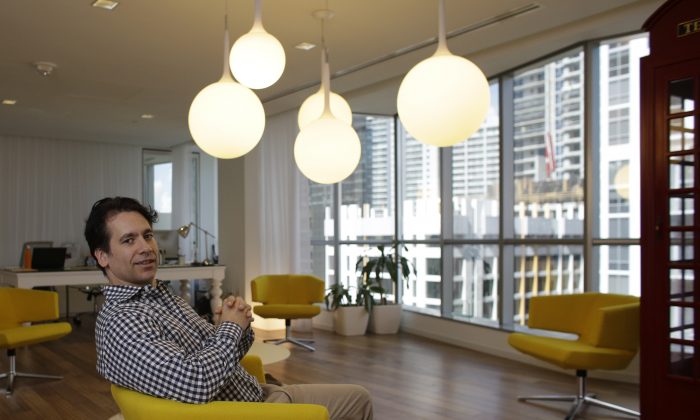 Philippe Houdard, co-founder of Pipeline, a shared workspace company, poses for a photograph in the lobby of Pipeline, in downtown Miami on Aug. 11. (AP Photo/Lynne Sladky)
US

MIAMI—Ten years ago, co-working spaces were a new concept, providing shared desks for freelancers and entrepreneurs as single “mom and pop” shops.

Today, the one-off, mom and pop spaces have been mostly replaced with chain companies, providing real estate developers a new way to lease traditional office space and to make connections with potential tenants.

Feeding off the tech startup boom and the increased mobility it allowed workers, co-working spaces took off — attracting lonely home-office dwellers out of their pajamas and sparing coffee shop-based freelancers an obligatory purchase of a cup of coffee in exchange for an all-day workstation.

“They’re people that want more stimulation than sitting at home and being very productive working in your pajamas all day,” said University of Michigan business professor Gretchen Spreitzer, who has studied for years how people thrive at work, focusing on co-working spaces in recent years.

Today, companies such as Pipeline, WeWork, Grind, and NextSpace have opened about 4,000 co-working spaces in most major U.S. cities and worldwide where desks and offices can be rented for a short or long-term. While prices vary by city and company, in Miami the spaces offer barrier-free communal desks starting at about $200 a month, fixed solo desks at about $500 a month and private suites starting at about $700 a month.

Co-working spaces are growing as more chains enter the field, Spreitzer said. For example, WeWork began five years ago and now has 49 open or soon-to-be open locations in 16 cities, including locations in Europe and Israel. In June, the Wall Street Journal said WeWork was valued at about $10 billion.

“We’re seeing more people in the world of real estate become more interested in co-working,” Spreitzer said. “WeWork is just as much a real estate developing company as it is a co-working space.”

A selling point of most co-working spaces is networking. Future “members”—a deliberate choice of wording—are attracted to the varied pool of businesses and possible mutually beneficial connections to be made in a shared workspace community.

“They have a community manager, somebody who is the heart and soul of the place … that helps make connections between people in the workplace, organizes social events, shared lunches, happy hours, seminars,” Spreitzer said. She said the focus on community building makes members feel “they’re part of something more than themselves.”

Grant Killingsworth, a commercial real estate agent in Miami, said landlords also are attracted by the potential to make connections, which may have contributed to their rise in popularity.

“A lot of the one- or two-person businesses that get their start in a shared workspace environment grow, and become larger, long-term tenants in the same building. So if you’re a landlord, it’s a sensible leasing strategy to have a shared workspace among the tenant mix,” he said. “It’s a built-in source of new potential tenants.”

Serial entrepreneur Adam Boalt had just sold his last company in 2013 and he needed a workspace where he could plan his next project. That’s when he heard about Pipeline, one of more than 25 co-working spaces in downtown Miami.

For $500 a month, Boalt could rent a desk in a busy office alongside other entrepreneurs and small companies. Originally skeptical, he signed up for a year after learning Google had rented space for some Miami employees. He has since rented more space as his new company grew.

“In one place I was able to talk to accountants, attorneys, web developers, web designers, every type of industry,” said Boalt, 38, who developed LiveAnswer, which provides small-business owners access to call centers by tapping into agents’ unoccupied time. “I was able to bring in new call center partners because of Pipeline.”

Philippe Houdard, 46, is co-founder of Pipeline, which has four open or soon-to-be open locations in Miami and one in Philadelphia. He worked from home after the Internet made it possible, but said the dream soon turned bitter.

While researching their next business venture, Houdard and Pipeline co-founder, Todd Oretsky, both entrepreneurs, needed to find a workplace. Feeling isolated and uninspired at a traditional office, the pair built on the concept of executive suites like Regus, a company leasing business suites in offices across 120 countries, to add an “engaged community” to the mix.