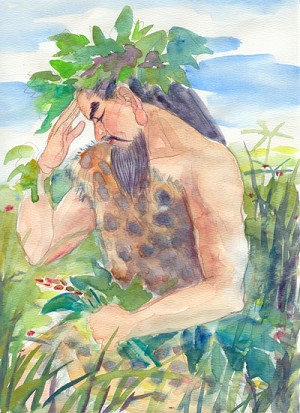 Shennong, or Divine Farmer, is said to have taught the Chinese farming and herbal medicine. (Source: www.zhengjian.org)
China

As Chinese mythology has it, after God Pangu created heaven and earth and Goddess Nuuwa created human beings, more gods were sent down to assist human life and help build civilization. One such god is a legendary King Shennong, or the Divine Farmer, who taught the Chinese how to farm and to use medicinal herbs. He is said to have invented many agricultural tools such as the plow, axe, hoe, etc., and taught the ancient Chinese how to convert barren wasteland into farming fields. He also tasted hundreds of plants and distinguished 365 different kinds of medicinal herbs.

Among the many legends about Shennong, the story of his tasting hundreds of herbs is the best known.

At Shenong's time, grains and weeds grew together, as did useful herbs and wild plants. People could not distinguish edible plants nor differentiate poisonous plants from medicinal herbs. The common people relied on hunting as the main means to obtain food, but as time went by, birds and animals became scarce. Those who could not hunt anything went hungry. If people developed diseases, there were no medicines available to treat them. People had no choice but to let the conditions worsen until they ultimately died.

When Shennong saw the tragedies around him, he felt the pain in his heart. He meditated for three days and three nights, and then came up with a decision. He led a group of his people and headed for the mountains to the northwest.

After crossing numerous rivers, climbing over countless hills, and walking for innumerable miles, on the 49th day, they came to a mysterious mountain covered by thick fog. In the air floated a strange yet pleasant fragrance.

As they were about to approach the mountain, suddenly, a large pack of wild beasts jumped out of a nearby valley and surrounded them. Shennong told his people to fight the beasts with whips. After driving away one group of the wild beasts, another group would come to attack them. They fought ceaselessly for seven days and seven nights before they drove away all the beasts. The whips left deep scars on the skins of those leopards, tigers, and pythons. The scars later turned into the patterns on the skins of the wild animals that we see today.

After realizing how dangerous this place was, Shennong's followers all urged him to leave, but Shennong firmly replied: “Our people are suffering from hunger and disease, how could I return to face them?” He then took the lead and walked over to the canyon at the foot of the mountain.

As they looked up, they discovered that the mountain rose into the clouds with sheer cliffs on all sides. No one could see the top and the mountain appeared to be impossible to climb. The crowd once again urged Shennong to return to home. He again shook his head with determination, and said: “Our people are suffering from hunger and disease, how could I return to face them?”

Shennong stood on a small rocky hill, looked around and thought about how to climb the mountain. Suddenly he saw several monkeys climbing from vines hanging off the cliff, and he immediately knew what to do. Shennong asked his people to chop down trees and build platforms leaning against the cliff. They built a layer of platform every day.

Seasons came and went, and they spent an entire year building 360 layers of platform before they finally reached the summit. The legend describes how modern day scaffolding techniques were derived from his method of platform construction.

Once at the summit of the mountain, they saw stretching in front of them a vast world of plants, with leaves of all shapes and flowers of all colors. Shennong knew he had found what was looking for. He led his people to settle there, and started to taste various types of plants. At night, Shennong made a bonfire and used the light of the flame to record his discoveries. He thoroughly documented which types of plants were bitter, which had warm or cold qualities, which ones could be used as food, and which ones could be used to cure illnesses. There were times when Shennong tasted up to 70 different kinds of poisonous plants within one day.

Shennong spent 49 days tasting hundreds of plants; his footprints covered the mountain top. He successfully identified modern day staples such as wheat, rice, millet, bean, and sorghum. He told his people to take back the seeds of those plants and to grow them in the fields. These five plants were later called five grains. Shennong differentiated poisonous plants from medicinal herbs, and discovered 365 kinds of herbal medicines which can be used to cure hundreds of diseases. He compiled his findings into a medical journal called “The Divine Farmer's Herb-Root Classic”, and instructed his people to take the book with them and use the knowledge to help other people in the world to treat illnesses.

This magic mountain of plants was later called “The Mountain of Shennong,” and Shennong has been regarded as the King of the Five Grains and Father of Chinese medicine.