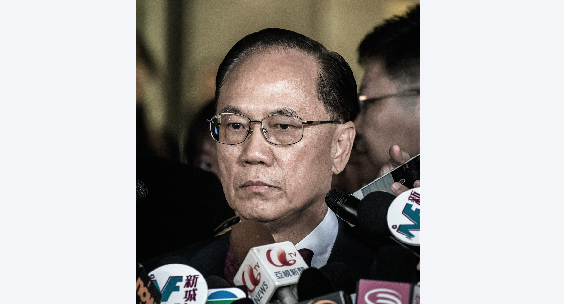 Editor’s Note: Recently many senior Chinese officials have been fired from their posts during the anti-corruption campaign carried out by Chinese Communist Party (CCP) leader Xi Jinping. Some of these instances have caused a stir domestically and internationally.

Many people have noticed that these fallen officials have a common characteristic: they all followed former CCP leader Jiang Zemin in brutally suppressing Falun Gong.

Bo and Zhou were directly linked to live organ harvesting and trafficking of Falun Gong practitioners, a crime against humanity that has never been seen before in history. The severity of Bo and Zhou’s crimes is beyond imagination, and their sentences are just the beginning of the widespread retribution taking place in China.

Since the beginning of the persecution, there have been frequent instances of mainland Chinese officials experiencing punishment for their evil deeds. Since the 18th National Congress of the CCP in November 2012, over 100 senior military and government officials ranked above the provincial level have been sacked.

The vast majority of these people had followed Jiang in persecuting Falun Gong. Today, these formerly powerful officials have either been locked behind bars or died from horrible diseases.

These incidents are waking people up, reminding them of the traditional Chinese principle that Heaven will reward good deeds and punish evil.

Many Chinese, including government officials, have come to understand the truth about Falun Gong and that the persecution is wrong. They have declared their withdrawal from the CCP and its associated organizations, freeing themselves and their consciences from the CCP’s crimes.

The principle of reward and punishment has not only shown itself in mainland China, but also in Hong Kong.

Some Hong Kong politicians and celebrities who used to help or support Falun Gong are now enjoying increasingly prosperous careers and fame. Their kindness and respect for the divine are being repaid.

On the contrary, those who followed the CCP to persecute Falun Gong have repeatedly met with evil returns.

Epoch Times will publish a series of reports on how individuals have received reward or punishment in connection with Jiang’s persecution of Falun Gong. The purpose is to attest to the natural law that good will be rewarded and bad will be punished, a principle that will not change with time.

The incidents taking place in China today give us a profound insight into this principle.

‘Justice Will Be Done’

On Oct. 5, ex-Hong Kong Chief Executive Donald Tsang Yam-kuen was formally charged by the Independent Commission Against Corruption (ICAC) with two counts of misconduct in public office, making him the most senior official to be prosecuted in Hong Kong’s history.

The trial took place two days before Tsang’s 71st birthday. If he is convicted, the maximum penalty for each crime will be seven years in prison.

The former Chief Executive’s involvement in corruption cases has attracted international attention, and more than 100 reporters gathered at the court. The news is in print everywhere, from the United States’ Wall Street Journal and the British Financial Times to the small European country of Liechtenstein.

“Tsang ended his term in disgrace in June 2012,” stated The Guardian, a British newspaper.

Tsang took the office of Chief Executive in 2005 after Tung Chee-hwa resigned due to leg pain, and he left the post in 2012 when his term expired. Before his departure, Tsang was exposed for accepting bribes, including a private airplane and yacht tour provided by wealthy tycoons and a Shenzhen luxury retirement house from Bill Wong Cho-bau, a CCP National Committee member and main shareholder and director of Digital Broadcasting Corporation Hong Kong Limited.

Tsang was nicknamed “greedy Tsang” and was subjected to investigation by the ICAC in Feb. 2012. During his time in office, there were several shocking incidents of suppressing Falun Gong in Hong Kong.

Before July 1, 2007, Hong Kong witnessed the largest repatriation incident in its history.

More than 800 Taiwanese Falun Gong practitioners were illegally denied entry, including denial of boarding or denial of a visa.

Denial of Visas to Shen Yun

The Hong Kong Falun Dafa Association requested a judicial review. In March 2011, the Hong Kong High Court ruled against the government. The judge criticized the Immigration Department, saying, “The reason for the decline is obviously lack of focus.”

The decision was described by the Hong Kong human rights community as “an important victory.”

Tsang worked in the Hong Kong government for over 40 years. From a post as a financial secretary of the British-Hong Kong era to his position as Chief Executive, he moved closer to the central Chinese regime step by step.

Eventually he became Jiang Zemin’s accomplice in suppressing Falun Gong. Now facing a scandal and court case, Tsang is regarded as an example of “good is rewarded with good, evil is punished with evil” in Hong Kong.

She is also highly respected by the international community because of her integrity and indomitable spirit. In 1999, Jiang Zemin experienced Falun Gong practitioners’ protests when he attended the handover ceremony of Macao.

When Jiang said, “The HKSAR Government has the responsibility to safeguard national security,” Chan responded, “Falun Gong is a legal organization in Hong Kong, and all their activities are permitted as long as they do not violate the laws of Hong Kong.” This enraged Jiang.

In 2000, Falun Gong practitioners applied to the Leisure and Cultural Services Department (LCSD) to book Hong Kong City Hall for an experience sharing conference that was to be held in 2001. The LCSD consulted with Chan, who said to process the application per the general situation.

The LCSD then leased the venue to the Falun Gong practitioners, and Jiang’s nerves were again hit.

On April 20, 2001, Chan announced early retirement for personal reasons. She said in front of the media, “Falun Gong is good; a lot of people support Falun Gong.”

Chan’s insistence on a righteous conscience, and especially her sympathy and support for Falun Gong, have gained her acclaim from the Hong Kong mainstream society and international community, and won her the title “Hong Kong’s conscience.”