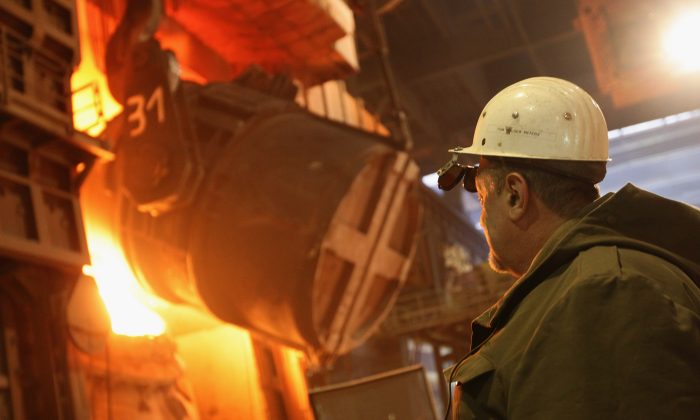 A worker watches as molten iron flows into a furnace for purification and alloying to become steel at the ThyssenKrupp steelworks on Jan. 13, 2010, in Duisburg, Germany. Carbon is needed to produce steel, which complicates efforts to realize a carbon-free future. (Sean Gallup/Getty Images)
Opinion

Good Luck G-7 Leaders With Getting Off Fossil Fuels

The most powerful leaders in the West used the G-7 summit in Germany to make a big statement on the environment. Their stated goal is to cut carbon emissions by 40 percent to 70 percent by 2050 and then end all fossil fuel use by 2100. They announced a US$100 billion fund by 2020 comprising public and private money to help smooth the transition. My response to David Cameron, Angela Merkel, and the rest is pretty simple: good luck with that.

When people talk about decarbonization, they tend to make the mistake of thinking about energy only in terms of electricity. If you ask how to wean us from fossil fuels, they will say build more solar power, more wind farms, and so forth.

There are several problems with this. We are already struggling with capacity on the grid and have a huge task to add as much renewable energy as it can cope with. To cover the extra requirements to make heat and domestic transport electric, we would need five times more. I don’t know anyone who thinks this is remotely realistic.

Because most forms of renewable energy only work when the power source is available, be it wind, sun or whatever, we will need large amounts of storage capability to allow them to replace electricity powered by fossil fuels. And while it’s easy to see how you can store kilowatts and megawatts of green power in the batteries of the future, getting up to gigawatts is another matter. The huge engineering requirement makes it almost impossible to get the costs to a point where this is viable.

Electricity is also the least of the big drains on energy. The big challenges are transportation fuels, especially for long-distance haulage and trans-ocean shipping. We really don’t have any smart ideas for replacing diesel for these yet, and it’s difficult to see where they will come from.

The Royal Academy of Engineering did a study in 2013 looking at the options for low-carbon fueling of shipping. The best it could come up with was LNG (liquefied natural gas).

You can conceive of running large numbers of domestic cars on green electricity by charging them on the grid. But the idea that anybody is going to be able to produce a battery big enough to store the electricity to power a passenger aircraft or a major container ship is laughable.

Then there is hydrogen. It’s got fantastic potential. It has a few cost issues at the moment, but they can probably be sorted out over the next few decades. It may well emerge as a viable option for domestic transport, but it has nothing to offer heavy haulage either.

To have enough hydrogen to power a trans-ocean ship or plane would require massive amounts of compression that would use so much energy that it would not be worthwhile. It appears beyond the limits of physics to overcome this.

Other Drains on Fossil Fuels

So far I have only talked about energy—yet we have built our societies around many other uses of fossil fuel that rarely get mentioned. Fertilizers is a good example. Most of the world’s food supply is based on fertilizers, and I don’t know of anybody who is suggesting that the largely urban population we will have by 2050 can be fed without using the amount of fertilizers we use at the minute, or that they can be produced without using fossil fuels.

Then there is steel. We are recycling more and more steel, but 50 percent of it is still primary production from virgin materials (and this is expected to continue). Steel is actually an alloy of iron and carbon, so it’s not just a question of the energy that we need to produce it.

You can reduce the fossil fuels on the energy side by switching to an arc furnace powered by hydroelectricity, for instance, but where are you going to get the carbon for primary production? Your only alternative to fossil fuels is charcoal, which would entail mass deforestation across the world to get enough—and massive carbon emissions to make it from wood.

Society also depends on plastics. Where are you going to get plastics in sufficient quantities to meet demand without fossil fuels? The same applies to materials we need for renewable-energy essentials like lightweight carbon-fiber wind-turbine blades, and thin-film photovoltaic technology. Nobody has a serious alternative to this. Equally we could talk about pharmaceuticals, cement—the list goes on.

That’s not to say I don’t welcome the US$100 billion fund. It means more funding for research into renewable energy, which is definitely needed. But even on an 85-year timescale, it’s difficult to see what we can do about the barriers of physics. I wish I could simply endorse the climate-change protesters and say it can all be done, but that would require a suspension of disbelief at the expense of scientific honesty.

That’s not to say we can’t make a difference in many ways. Geothermal energy is not on most people’s radars, but it has vast potential that’s not even close to being exploited. We can change the game in short-haul transportation by switching to electric and hydrogen-powered cars.

There are various ways in which nuclear power can potentially be improved, for example by using thorium instead of uranium as the feedstock, or by getting more energy from nuclear waste. There is nuclear fusion too, if it ever succeeds. But nuclear is no good at responding to fluctuations in power demand—and neither are renewables—and it’s difficult to conceive of this changing.

I have no sentimental attachment to fossil fuels. I have had relatives who died in coal mines. But as an engineer, I have to admit when I am beaten.

I can see a Gandhian future where everyone uses many fewer fossil fuels and lives in a much more spiritual way, and I would welcome it. But I don’t see any signs of that coming out of the G-7.

Realistically the only solution to our fossil-fuel dependency is an end to mass consumer culture.

Realistically the only solution to our fossil-fuel dependency is an end to mass consumer culture, but that’s just not what the politicians are proposing. Instead we are just encouraging the developing countries to get addicted to the same consumer lifestyle as those in the West.

We are more realistically heading towards a world in 2100 where we depend more heavily on coal.

Probably where we are more realistically heading is toward a world in 2100 where we depend more heavily on coal. Unlike oil, it will still be available in large quantities. We will remove the majority of the carbon emissions by coupling carbon capture and storage technology to underground coal gasification.

The fact that the politicians are not telling us this is a sign of the triumph of the protesters. They have managed to change the argument from reducing carbon emissions to getting rid of fossil fuels, since nuclear is low-carbon and not something they approve of. So instead we get platitudes that are empty and unachievable. Until we can have an honest conversation about the future of our relationship with energy, there is no point in taking our leaders seriously.

[i]Paul Younger is professor of energy engineering at University of Glasgow. This article was previously published on TheConversation.com [i]