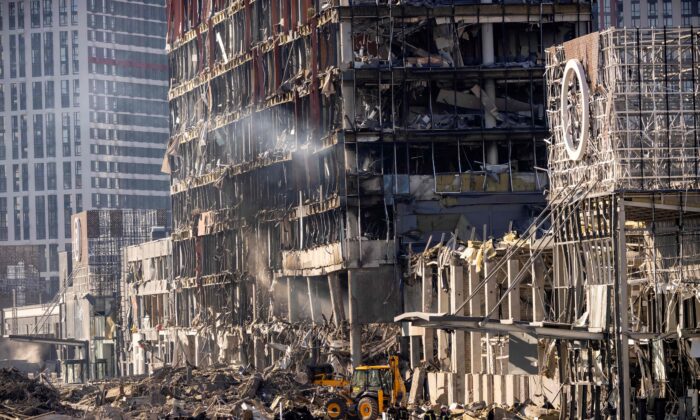 Ukrainian firefighters work amid the rubble of the Retroville shopping mall, a day after it was shelled by Russian forces in a residential district in the northwest of the Ukrainian capital Kyiv, on March 21, 2022. (Fadel Senna/AFP via Getty Images)
Thinking About China

The Russian invasion of Ukraine shows the lengths that some people go to make things gray. And without good guys, there is no reason for action against Russian, or likely Chinese, aggression.

One of the revealing parts of the Russian invasion of Ukraine has been the lengths that some intellectuals go in defending inaction. But many thinkers try to muddy the waters and make the issue so gray that there are no good guys. This is a dangerous line of thinking used to support the idea of doing nothing in the face of aggression and slaughter. In the case of Chinese aggression, this plays into the Chinese Communist Party’s (CCP) playbook.

Making the issue gray is done in a variety of ways. The swamp over at the Mises Institute cites “the complexity of the war’s causes meant there was no justifiable reason for the United States to enter.” Tucker Carlson and others claim that Ukraine isn’t really a democracy. Or that it is too corrupt to really be the good guy. These items have various degrees of truth in them. Ukraine was often described as corrupt by mainstream media outlets, and Ukraine and Russia have a long and complicated history.

But the invasion by Russia is the most nakedly aggressive war I have seen in my lifetime (until China tries something), and the undisputable ravages inflicted on Ukraine make stopping that aggression good, and just no matter how much isolationists try to throw dubious history at it.

It is important to recognize and refute this thinking now because Chinese aggression, like Russia’s, will try to act quickly to seize disputed territory and present the world with a fait accompli. And China is much better at manipulating Western liberal guilt and isolationist tendencies.

For example, at a press briefing on Feb. 17, the Ministry of Foreign Affairs spokesperson, Wang Wenbin, said that Asian Americans are the victims of “systemic racial discrimination” and the United States must do more to “safeguard the legitimate rights and interests of ethnic minorities.” He also said that America should make sure “[Asian Americans] are free from violence and fear and enjoy equal rights as they deserve.”

Violence against anyone is indeed wrong, and the United States has work to do on ensuring safety for everyone. But these words came from a regime that commits genocide against millions of people.

Beijing’s minister invoking “systemic racism” is likely an attempt to reignite that debate among Americans. And every second spent arguing about that topic means another second the regime doesn’t have to defend its treatment of Uyghurs, its oppressive security state, and its suppression of Hong Kong’s freedoms.

More recently, when pressed about the above crimes, Wang responded about American hypocrisy regarding Native Americans. This is a clever argument from Beijing because the Western obsession with its history of racial sins has become pathological.

The guilt Western leaders have over racism and sexism has led to the following: violent felons getting low bail and being free to run over people at a Christmas parade or attacking a Thai model at a New York City subway platform; a cancel culture climate so heated that makes survivors of China’s Cultural Revolution recall that event; the labeling of violent riots as “mostly peaceful”; and, in general, a malaise and lack of confidence that makes people and government leaders less likely to confront Chinese aggression over disputed territory and to condemn human rights abuses by the regime.

Beijing expects Western officials trying to be tough on China to feel a stab of pain to their core when Chinese authorities invoke America’s racist past.

In the event of invasion, Beijing will likely use language that reinforces America’s tendency to self-doubt among liberals and isolate among conservatives. We’ve already seen evidence of this in the Ukrainian struggle.

The analyst went on to say that the “United States has repeatedly exaggerated tensions, constantly fanning the flames of the situation in Ukraine. But when the fire really started, the United States not only ignored its own responsibility, but distorted the facts, diverted its attention, blamed China, and made groundless accusations against China. This despicable method of creating something out of nothing and blaming others has once again exposed the ugly face of America’s habit of lying for its own sake.”

Distorting facts and diverting attention with long and tendentious history sounds like a replica of tactics to undermine the idea that there are good and bad guys in Ukraine. And those tactics will be repeated when the regime in China aggressively asserts its territorial claims.

It is crucial to maintain a moral perspective. We can recognize our own mistakes and learn from the past. Americans should also be cautious about entering warfare. But when a totalitarian dictatorship invades a democratic nation in the most nakedly ambitious event of my lifetime, we can reasonably side the victim of aggression with moral certitude.

Recognizing the serious flaws of every country doesn’t give an aggressive power license to invade, and America must not lose the courage of conviction to aid its allies in the face of aggression.