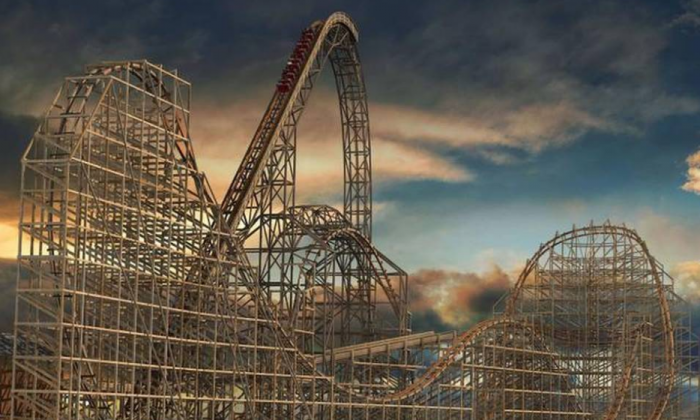 The record-breaking coaster is the world’s fastest wooden coaster with the tallest and steepest drop, plunging riders down 180 feet and rocketing through twists and turns at up to 72 miles per hour.

It also features a drop at an 85-degree angle.

One cycle of the ride takes approximately 90 seconds.

The coaster opened after a two week delay.

So is it worth the hype?

According to Timeout Chicago, yes.

“Forget rickety hills and whiplash turns—Goliath is a wooden coaster for the modern age, taking advantage of recent technological advances to provide one of the smoothest rides we’ve ever experienced,” the reviewer said.

“The ride begins with a gradual climb up the coaster’s 165-foot incline, inching forward until the cars crest over the near-vertical downhill, Goliath’s most thrilling feature. For a split second you’ll feel as if you’re careening straight to the ground—until you suddenly level out and zoom through an underground tunnel. An over-banked turn leads to a string of gravity-defying maneuvers, beginning with a 180-degree roll into an inverted drop which leads into an inverted hill.

“It’s the most disorienting part of the ride, twisting riders upside-down while they’re falling and then again while they’re climbing. Another trip through the coaster’s subterranean passage leads to a final banked turn before depositing riders back at the station. Like any great roller coaster, Goliath feels like it’s over in a matter of seconds (it actually lasts about a minute and a half) and leaves you shaken, but ready for another ride along its twisted tracks.”