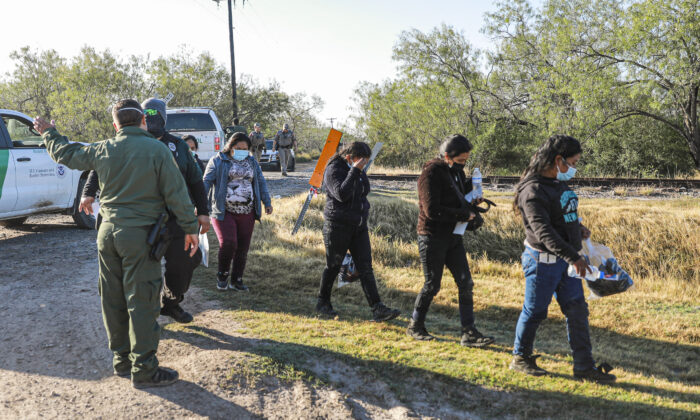 Goliad Sheriff: Cartels Are Preparing for Influx of People Never Seen Before in US History

Border Patrol agents and Texas law enforcement officers are bracing for as many as 500,000 illegal immigrants waiting in Mexico to enter Texas in the Rio Grande Valley (RGV) Sector once Title 42 is lifted, Goliad County Sheriff Roy Boyd told The Center Square in an exclusive interview.

The Rio Grande Valley Sector, one of 20 U.S. Customs and Border Protection (CBP) sectors, stretches from the Gulf of Mexico south of Brownsville west to the eastern tip of Falcon Lake in Starr County. RGV Sector Border Patrol agents are tasked with patrolling over 320 river miles, 250 coastal miles, and 19 counties equating to more than 17,000 square miles in the busiest sector along the southern border.

Located at the tip of Texas, the RGV Sector is the shortest distance to reach for those traveling from eastern and southern Mexico and Central America. Officials say it’s almost impossible to get to without the Gulf Cartel, which controls both sides of the Rio Grande River in the region.

Roughly 150 miles north, Boyd says he and others in law enforcement are seeing cartel movement they have never seen in their decades-long careers.

“After spending the winter with normal smuggling activity along the corridors and not having activity in the brush, from what we’ve observed so far, smugglers are beginning to make preparations for a much larger event—something the likes of which we’ve never seen before,” he told The Center Square. “They’re staging stolen vehicles on abandoned properties, supplies in shacks and in other drop off points preparing for heavy foot traffic heading north.

“We’re expecting a surge of people we’ve never seen in the history of the United States, all because of [President Joe] Biden ending Title 42,” Boyd said, and because Immigrations and Customs Enforcement “has the hands of border patrol agents tied, preventing them from enforcing Title 8.”

The Biden administration announced it was ending Title 42, a public health authority that has allowed CBP and Border Patrol agents to quickly expel illegal immigrants during a public health emergency. Title 8 is a federal policy on expulsions.

After Department of Homeland Security Secretary Alejandro Mayorkas altered immigration policy last year, including halting and restricting most deportations, Title 42 has been seen as the last measure holding back the influx of people entering the United States illegally from over 150 countries.

In Biden’s first year in office, roughly two million people entering the United States illegally were apprehended or encountered by Border Patrol agents. Another one million are expected to enter illegally before or by the time Title 42 ends May 23.

To the cartels, repealing Title 42 is a lucrative windfall, critics of the decision say. In the small Mexican town of Ciudad Miguel Alemán across the river from Roma, Texas, for example, cartels were reportedly earning $70 million a week in their human trafficking operations last fall.

Historically, the Gulf Cartel has contracted with the Texas Chicano Brotherhood Gang based in Rio Grande City, in Starr County, as enforcers in Texas, Boyd said. After Homeland Security agents aggressively worked to help neutralize them, gang activity lessened in the area. But now, with an unprecedented opportunity to make even more money, the gang, or others like it, will be reinvigorated, Boyd said.

Illegal immigrants being trafficked into Texas are part of the “modern day slave trade. This is huge money for cartels. It’s far more lucrative than drugs,” Boyd added.

Texas sheriffs, as the first and last line of defense in their counties, have been on the front lines fighting illegal immigration for decades. Underfunded and understaffed, they received additional resources through Gov. Greg Abbott’s border security initiative Operation Lone Star after the state legislature last year allocated a record $3 billion to the initiative.

Despite having more resources and an effective multi-agency network to push back the cartels, Boyd said, “no one can really fathom what’s coming.”