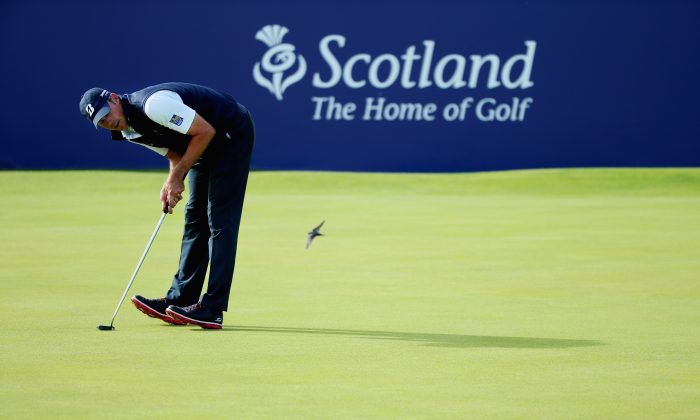 Matt Kuchar reacts to his putt on the 18th green during the second round of the Aberdeen Asset Management Scottish Open at Gullane Golf Club in Gullane, East Lothian, Scotland, on July 10, 2015. (Andrew Redington/Getty Images)
Golf

Professional golfer Matt Kuchar defended paying his caddie $5,000 after he won more than $1.2 million in the Mayakoba Golf Classic in November.

Kuchar, 40, said he paid Mexican caddie David “El Tucan” Giral Ortiz, who had replaced Kuchar’s regular caddie, $5,000 and said he would pay him $15,000 if he won. However, Ortiz turned it down, according to an interview he did with the Golf Channel.

The golfer said he and Ortiz had an agreement that the caddie would make $3,000 per week with a bonus that would have netted him $4,000.

“I ended up paying him $5,000 and I thought that was more than what we agreed upon,” Kuchar said. “I kind of think, if he had the chance to do it over again, same exact deal, that he’d say ‘yes’ again.”

But Ortiz told Golf.com that he believed he wasn’t paid enough.

Ortiz said that “his work and contribution toward the win was worth $50,000.”

“Matt is a good person and a great player. He treated me very well. I am only disappointed by how it all finished,” he told Golf.com.

Caddies normally get around 5 percent of a player’s earnings and as much as 10 percent depending on if the golfer finishes near the top, the New York Post noted.

Kuchar’s regular caddie would have made about $126,000, reported the Washington Post.

"Fair is fair, and I feel like I was taken advantage of by placing my trust in Matt.”David "El Tucan" Ortiz, Matt…

But the golfer said that the agreement with Ortiz was fair.

He added: “You can’t make everybody happy. You’re not going to buy people’s ability to be OK with you, and this seems to be a social media issue more than anything. I think it shouldn’t be, knowing that there was a complete, agreed-upon deal that not only did I meet but exceeded.”

“I am not looking to disparage Matt or give him a bad name. Fair is fair, and I feel like I was taken advantage of by placing my trust in Matt.” https://t.co/gg6PmQ66YK

He said, “So I certainly don’t lose sleep over this. This is something that I’m quite happy with, and I was really happy for him to have a great week and make a good sum of money. Making $5,000 is a great week.”

Many People Missing Out on Health Benefits of Golf

Playing golf is associated with better strength and balance, a sharper mind, a lower risk of heart disease and a longer life, according to public health experts who say more people should take up the sport, Reuters reported.

While an estimated 60 million people play golf at least twice a year, golfers are primarily middle-aged and older, affluent, male, white, and living in North America, Europe, and Australia, experts note in the 2018 International Consensus Statement on Golf and Health published in the British Journal of Sports Medicine.

“Golf can provide an aerobic physical activity to persons of all ages, and strength and balance benefits to older adults,” said Dr. Andrew Murray of the University of Edinburgh in the UK.

“Regular physical activity is one of the best things you can do for your health, decreasing the risk of heart attacks, strokes, type 2 diabetes, as well as dementia, depression, and anxiety,” Murray, lead author of the consensus statement, said by email.

“Golf is not unique in providing this, and anything involving physical activity can be of great benefit,” Murray added. “Golf additionally is green exercise, gives time to relax, and in a world where older adults are generally less active than youngsters, can be played from 3 to 103.”