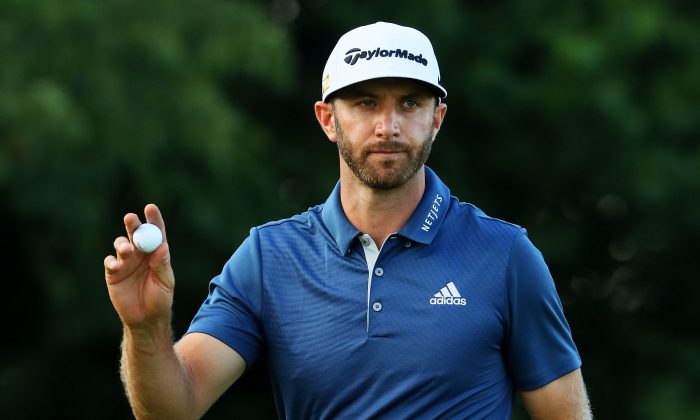 Dustin Johnson celebrates a par save on the 16th green during the final round of the U.S. Open at Oakmont Country Club on June 19 in Oakmont, Pennsylvania. The discussion about rules at the tournament spurred changes in the rules of the game. (Andrew Redington/Getty Images)
Golf

The words “change” and “golf” are not joined at the hip. But last year’s U.S. Open provided a clear illustration on how the sport functions, and doesn’t function, through its rules-making apparatus.

The near debacle at Oakmont placed the sport’s governing body in America and in Mexico—the United States Golf Association (USGA)—in a ticklish situation. A lengthy final round debate meant an embarrassing delay, mounting uncertainty, and nearly a post-round application of a penalty stroke that could have ultimately impacted the winner of the game’s second oldest major event.

Dustin Johnson’s three-stroke win—reduced to two because of an applied post-round penalty stroke—saved the day for the USGA, but the fallout was considerable.

On March 1, the USGA and its partner in determining the universal rules of golf, the R&A in Scotland, announced sweeping changes in how the game is played. The proposal is now in a comment phase through Aug. 31 and if all moves along, the new rules would take effect Jan. 1, 2019.

Initially, the first rules of golf—13 in total—were codified as early as 1744. Since then, the number and complexity of the rules escalated. Given the fact golf is played in an open field, the applicable rules were further refined with related decisions adjudicating any number of circumstances that could happen. In no short order, the rules required the Wisdom of Solomon to administer and the patience of Job for players to understand them.

Presently, there are 34 rules in golf with accompanying language that would make a lawyer proud of its detail, wordiness, and complexity. The proposed changes would now reduce the total from 34 to 24 and available in a much more user-friendly, concise, and easier-to-understand process covering the most likely situations through illustrations and accompanying photos.

The movement to have such sweeping rules changes was not started because of Johnson’s plight last year. That process had been in motion for roughly five years prior, but clearly the imbroglio at Oakmont during the U.S. Open brought the issue to a glaring uproar.

Among the key rule changes would be eliminating the penalty if a ball is accidentally moved by the player—the situation in which Johnson was penalized. In addition, the time one can look for a lost ball is reduced from five to three minutes in order to speed up overall play as well, and a maximum of 40 seconds to play a shot when one’s turn is at hand.

Players can also leave the flagstick in the hole when putting from the green. The prohibition against repairing spike marks on a putting surface would be eliminated as would the rule outlawing the removing of loose impediments from bunkers.

The procedure for dropping a ball when relief or penalty situations is involved has changed to dropping the ball from just above the ground as opposed to the current rule of being shoulder height with arm extended.

The proposed rules changes come at a time when other larger issues are looming. Golf as a sport is seeking to induce millennials, women, and minorities. The construction of new courses has nearly come to a halt in America, as opposed to the early 1990s when over 300 courses were opening.

Will such new rules spur new people to play the game? That’s hard to say. Core issues include the lack of overall available leisure time. The overall costs associated with playing the sport and the difficulty in learning to play the game remain formidable anchors still holding the golf ship down.

Certain key stakeholders, namely a few top playing professionals, believe the rules that govern high-level events for world class players should be separate and distinct from that of recreational players. Neither the USGA nor the R&A believe bifurcation is prudent. The rules of golf, in their assessment, should remain under one roof for all.

If the proposed rules changes can help speed the game up, and, at the same time, add a good bit more enjoyment then the playing of the sport will benefit.

Still, golf has a broader identify factor. Viewed by many as an elitist’s game, played by older white males, at locations gussied up with an over abundance of water and chemicals applied.

The proposed new rules cannot deliver sweeping answers to the broadest range of issues the sport is facing on several fronts. But it is a clear admission the past instances of simply hunkering down and refusing to see the macro forces impacting the sport is now clearly in the rear view mirror.