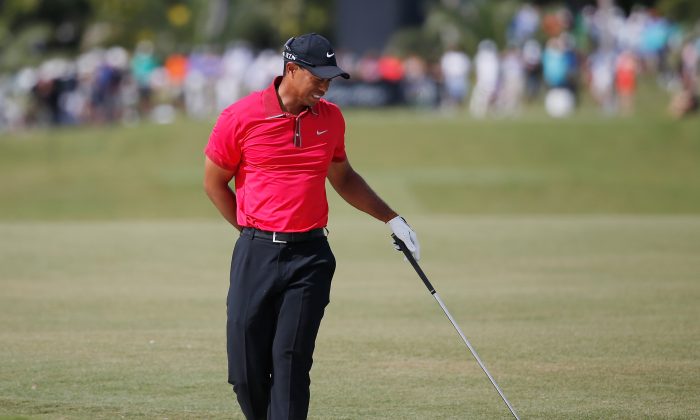 Tiger Woods grimages after playing a bunker shot on the fifth hole during the final round of the World Golf Championships-Cadillac Championship at Trump National Doral on March 9, 2014 in Doral, Florida. (Chris Trotman/Getty Images)
Golf

Golf: Not Out of the Woods—Yet

The decision made this past Wednesday by Tiger Woods on his website to withdraw from this year’s US Open was no surprise. The only real surprise would have been for the three-time champion to actually be competing at Pinehurst June 12-15. “Unfortunately, I won’t be there because I’m not yet physically able to play competitive golf,” Woods said in his statement.

The 38-year-old had already stated publicly that the healing process for the pinched nerve in his back is progressing steadily—but slowly. The only golf shots he has hit have been innocent putts and chips—nothing heavy duty.

The announcement from the former world number-one gave was predictably non-committal in regards to a return to play. “The U.S. Open is very important to me, and I know it’s going to be a great week. Despite missing the first two majors (this year), and several other important tournaments, I remain very optimistic about this year and my future.”

The insertion of the words “very optimistic about this year” is public relations speak. Woods has never stated a time table to return to play and the drip/drop of information is a clever tease to keep the story churning along.

Frankly, given what Woods has already stated publicly it seems highly doubtful he will play any of the remaining major events this year—and his involvement with the American side for the Ryder Cup Matches is also in jeopardy.

Since Woods stopped playing in late March the golf season has been in a word—dull.  Yes, Bubba Watson won his 2nd Masters this past April at Augusta but viewer ratings for the event were down considerably—guess why? Tiger was a no show and Phil Mickelson missed the cut and the end result—viewers went elsewhere.

This past week things picked up considerably with the “new” world #1 Aussie Adam Scott winning the Colonial Invitational and the former world #1 Rory McIlroy winning the BMW Championship on the European Tour. For Rory the golf news finally pushed aside all the gossip and speculation about the end of his engagement to tennis player Carolina Wozniacki.

It’s been said no player is above the game they play. In most instances that is patently true. However, Woods has elevated golf to heights never envisioned. No question he benefits— positively and at times negatively—in the 24/7 nonstop social media world we live in now. Jack Nicklaus and Arnold Palmer never needed to handle the constant micro search for information that is part and parcel in today’s insatiable chatter universe.

Golf, as a game, is not growing—especially in the United States. Woods when he first came onto the scene was supposed to bring more minorities into the game. That didn’t happen, and in fairness to Tiger the issues go considerably beyond him.

If and when Tiger returns is only one dimension to the story. Can he recapture anything remotely close to the dominance he once routinely displayed? Yes, he’s missed a total of 5 majors since 2008 and will add to that total next month at Pinehurst. But the issue for Tiger is more than just the physical—it’s the mental. Does he still have the relentless passion he has shown since picking up a club and competing? In 2008 when he won the US Open for a 3rd time in a tour de force performance for his 14th major triumph, it appeared he would be flying by the 18 majors Nicklaus had won. That hasn’t happened either.

Tiger has two growing children and unlike other golf superstars from the past his path at this point stems from being a single Dad. How much time can he devote across the board? Does he even want to do that?

Watching Tiger in the hunt—with utter command of his game—is what golf fans and even broader sports followers want to see again. Nothing excites the crowd more than to see the emotions he provides with his fist pumping after hitting the shot no one can possibly envision happening—save for Tiger himself.

Golf has been in the woods—no pun intended—these past few months and the darkness displayed has been paralyzing. Yes, Tiger is still a young man but the mileage on his tires is considerable. I will not count him out because in all past instances the doubters have looked foolish.  The will to win that Tiger has always displayed has been his calling card.

What happens at Pinehurst matters—the same for Royal Liverpool at The Open in July and at Valhalla at the PGA in August.  What happens with Tiger matters no less. The Woods of old may never return to the heights shown when he held at one time all of golf’s major events. But if he can rekindle the drive, then the back surgery will have served a purpose. Sometimes taking one step back can ultimately mean two steps forward. Golf—and the broader sports world—needs him back to carry the conversation back to what is happening on the course. To paraphrase Gordon Gekko when talking to Bud Fox in the movie Wallstreet – “it’s all about Tiger kid, the rest is just conversation.”