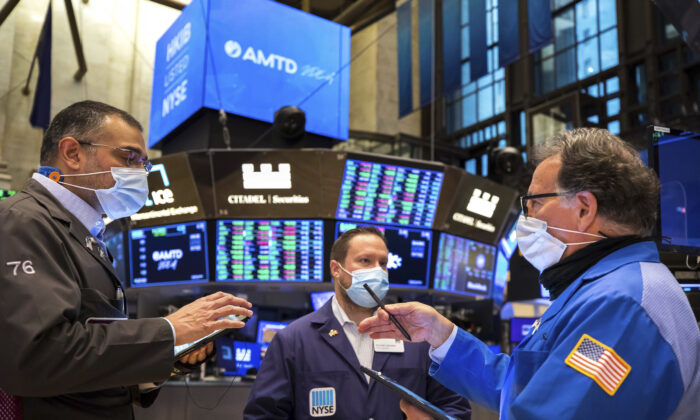 Goldman Sachs said in a note that recent stock battering is likely a correction within an ongoing secular bull cycle and that the depth of selloff has not yet plumbed the bear market “danger zone.”

“While it has not reached danger zone levels that typically precede a bear market (a fall of at least 20 percent), it has reached levels which have typically been consistent with corrections and relatively low returns over the next one and five years,” the Wall Street investment bank said in the Jan. 25 note.

So far this year, the S&P 500 has dropped around 8.5 percent, the tech-heavy Nasdaq is down around 14.3 percent, and the Dow Jones has fallen around 5.5 percent. Other risk assets, like cryptocurrencies, have also taken a beating.

High valuations and one of the strongest recoveries from a bear market in history have left risk assets like stocks vulnerable to a correction, experts say. Nicholas Reece, VP of Macro Research & Investment Strategy at Merk Investments, told The Epoch Times in an emailed statement shortly before the onset of the January stock rout that the 4 percent slide in the benchmark S&P 500 at the end of November 2021 was not enough to serve as a “healthy” correction and that investors needed to brace for more downside—a prediction that has since materialized.

“The current S&P 500 drawdown looks consistent with a healthy correction in an ongoing bull market. The market was overdue for one,” Reece told The Epoch Times in a Wednesday statement.

Reece also judged that stocks were in for a period of lower returns for some time going forward, a projection that roughly dovetails with Goldman’s projections.

“A flat to modest year for the S&P 500 would likely be a healthy development for the sustainability of the ongoing secular bull market,” Reece said.

On Wednesday, Wall Street equities were leaning forward ahead of the opening bell, with futures contracts on the S&P 500 rising 1.35 percent, the Nasdaq up 1.94 percent, and the Dow Jones climbing 0.97 percent before the start of trading.

The positive signal for U.S. equities comes as investors have their sights trained on the conclusion of the Fed’s policy meeting on Wednesday, awaiting clues as to how fast the Fed will tighten its loose monetary settings.

Surging inflation, which in the year through December hit a multi-decade high of 7 percent, has put pressure on the Fed to move quickly to tame runaway prices.

Expectations are for a March liftoff in the Fed’s benchmark interest rate, which was dropped to near zero at the start of the pandemic, which helped prop up the economic recovery but also contributed to inflationary pressures.

Federal funds rate futures markets have priced in a total of four rate bumps in 2022, according to CME’s Fed Watch tracker, with a 91.6 percent chance for a 25-basis-point hike at the Fed’s March meeting.