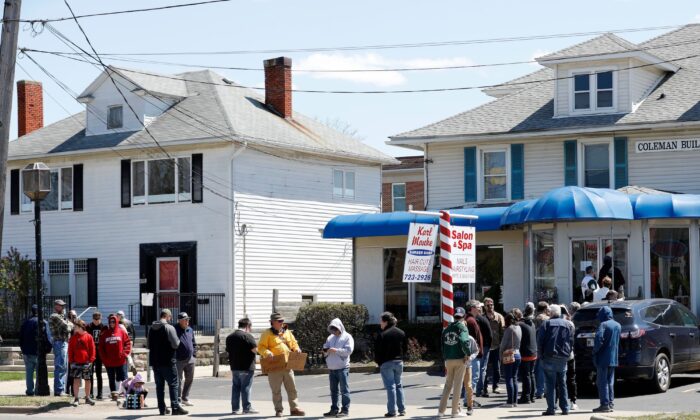 People wait in line to have their hair cut in front of the shop of Barber Karl Manke, who faces two misdemeanor charges for reopening his business despite state shutdown orders in Owosso, Mich., on May 12, 2020. (Jeff Kowalsky/AFP via Getty Images)
US News

A Goldman Sachs strategist estimated that the next stimulus check sent out to Americans could pay out more than the previous iteration that was sent out in April.

“Our forecast assumes one more round of payments similar to what the bill proposes,” Goldman Sachs strategist Jan Hatzius wrote in a note Wednesday, in reference to the HEROES Act that was put forward by House Democrats earlier in the week.

The House proposal would include $1,200 per family member and up to $6,000 per household. The previous round of stimulus payments paid up to $1,200 for individuals and $500 for children under the age of 17 up to a maximum of three dependents. It means that the HEROES Act will offer another $700 more for each child.

Hatzius said he believes there will be a scaled-down version of the bill passed before the end of 2020. The GOP-controlled Senate said it is unlikely that the legislation, in its current form, would clear the upper chamber.

The stimulus package, like the previous one passed last month, is intended to deliver relief to people who are out of work, furloughed, or suffered a reduction in pay amid the CCP (Chinese Communist Party) virus pandemic. Numerous businesses—large and small—have been forced to shutter in an attempt to curb the spread of the disease.

“We continue to expect another $1.5 trillion in fiscal measures over the course of 2020-22, with about $550 billion in 2020. Without an obvious forcing event this month, we do not expect Congress to enact the next round of fiscal measures until late June,” Hatzius wrote, according to Yahoo Finance.

In the note, the bank believes the next round of fiscal stimulus will include state relief, more unemployment benefits, more stimulus checks to households, and an extension on tax credits to businesses.

House Democrats expressed a willingness to vote on the HEROES Act this week.

“We must put more money into the pockets of the American people,” House Speaker Rep. Nancy Pelosi (D-Calif.) said. “There are those who say, lets just pause. The families who are struggling know that hunger doesn’t take a pause. Rent doesn’t take a pause,” Pelosi said.

But Sen. Lindsey Graham (R-S.C.), the head of the Senate Judiciary Committee, said the bill has “much unrelated to the coronavirus, it’s dead on arrival here.” Graham said he would like the bill to “focus on people who’ve lost their jobs, entities that’ve lost revenue.”

Reports have said that despite the opposition from GOP senators, the measure will likely pass in the House on Friday.