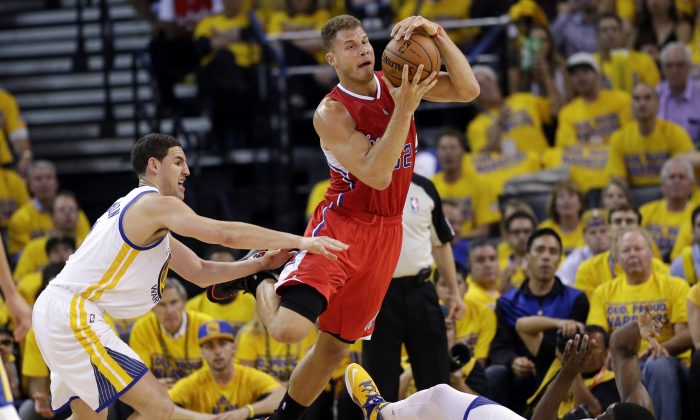 The Golden State Warriors will face the Los Angeles Clippers for Game 7 in LA, which starts at 10:30 p.m. ET, and a live stream can be watched at TNT Overtime. The game is also available on TNT.

AP update: After turmoil, Clippers head to Gm 7 with Warriors

LOS ANGELES (AP) — Doc Rivers couldn’t begin the Los Angeles Clippers‘ only day of preparation for Game 7 in the film room or on the practice court.

The coach was downtown at the Clippers’ team offices Friday, meeting with an angry roomful of ticket-sellers and marketers still outraged by owner Donald Sterling’s racist comments.

“I’ll say this much: Our players thought about not working. So did our employees, and they still felt that way,” Rivers said. “They needed somebody to ask them to continue to work and support us. We’re still trying to put this thing together.”

For both the Clippers and the Golden State Warriors, basketball has been secondary for much of this extraordinary series. But after the most tumultuous week in Clippers history, the first round is finally down to its grand finale.

The Clippers will host a seventh game for the first time in franchise history on Saturday night, hoping to draw energy from their Staples Center crowd for a cathartic victory. The winner gets a second-round date with Oklahoma City or Memphis.

The Warriors have been just one obstacle faced by the Clippers, who endured sleepless nights and immense scrutiny while their owner was exposed and subsequently banned for life from the NBA between playoff games. Los Angeles has lost two of three games since the Sterling saga began, playing lifelessly in Game 4 before struggling along with the Warriors in Game 6 on Thursday night.

When the Clippers went back to work Friday, Sterling-related memorabilia had been removed from the trophy case in the hallway at their palatial $60 million training complex built by Sterling six years ago. Even the “Sterling Drive” sign outside the Playa Vista facility had been taken down.

The Clippers missed their chance to wrap the series in Oakland, but the Pacific Division champions played all year for the chance to finish a series on their home court.

“It’s going to be tough, and you’re going to face adversity, and we clearly have faced adversity in this round,” said Blake Griffin, who managed just 17 points on 8-for-24 shooting in Game 6. “I think it’s just important that we all stayed the course and had positive thoughts about it. It is a Game 7, but it’s still a playoff game. It doesn’t change a whole lot.”

Neither team plans to spend much time working on tactics or adjustments after six games of seeing everything their opponent has to offer. Both teams aren’t saying much about various nagging injuries, from Chris Paul’s strained left hamstring for the Clippers to Jermaine O’Neal’s bone bruise in his right kneecap for Golden State.

Instead, two relatively inexperienced playoff teams are eager to show off everything they’ve learned about perseverance and toughness over the past two weeks, culminating in a rare winner-take-all finish to their series.

The Clippers’ core played a Game 7 two years ago, beating Memphis on the road for just their second playoff series victory since Sterling bought the team in 1981. Jordan and Griffin said there was little to draw from that victory, with Jordan barely remembering it.

The Warriors haven’t played a Game 7 since 1977, no surprise for a franchise with just three playoff berths in the last 20 years.

O’Neal is questionable for Saturday, but Festus Ezeli could make his season debut after knee surgery for Golden State.

When asked if an injury could keep him out of Game 7, Paul scoffed.

Even with the Clippers on the front page during this series, Golden State has plenty of its own internal drama. Jackson could be coaching his final game for the Warriors after the club ownership’s reluctance to publicly back his return despite the most successful two-year stretch in two decades.

Golden State was an underdog entering the series, but is one win away from a series victory despite its own struggles dealing with Sterling’s impact on the entire NBA.

“I think we’ve had more controversy than them throughout this whole season that gets overlooked, kind of thrown under the rug a little bit,” Golden State’s Andre Iguodala said. “We’ve had some battles this year we’ve had to deal with, but it’s kept us together and made us stronger.”