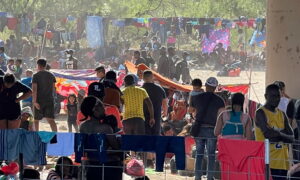 The alleged “Golden State Killer” has been charged with a 13th murder.

Officials announced on Aug. 13 that Joseph DeAngelo, who is believed to be the infamous “Golden State Killer,” murdered Claude Snelling, a journalism professor at the College of Sequoias.

Snelling was shot in September 1975 while reportedly trying to stop the kidnapping of his 16-year-old daughter in Visalia, California.

Snelling’s daughter Elizabeth Hupp, then-16, said that she woke up around 2 a.m. to a man wearing a ski mask, hovering over her.

The man told her to stay silent and follow him out of the house, or he would kill her.

She told the Visalia Times-Delta that when she and the man were going out the back door, he father spotted them.

“I heard a yell and saw my dad charge out the back door,” Hupp said. “[The kidnapper] threw me down and shot my dad twice. Then he pointed the gun at me.”

The man then hit her with his gun but ran off.

“The fact that he died saving my life means the world to me,” Hupp said. “My mom always said it wouldn’t have mattered if there were 20 guys outside with guns, he would have saved me.”

I missed seeing this originally…may many breath a sigh of relief. h https://t.co/ibF44LcGTv

Officials said the evidence that links DeAngelo to Snelling’s death included information from Hupp, witnesses, physical evidence, and the linkage of the gun used in a burglary that was also used in the murder.

“Today I have instructed my staff to file first degree murder charges against Joseph DeAngelo for the 1975 murder of Mr. Claude Snelling. And in doing so, I hope we can take what is really our first step in not only holding him accountable for the crime in Visalia but really providing justice not only to the victim’s family but to a community at whole,” said Tim Ward, Tulare County District Attorney, Bustle reported.

DeAngelo, 72, a former police officer, was arrested in April after DNA evidence from genealogy websites led the police to him.

DeAngelo is suspected of killing 13 people as well as committing dozens of rapes and home invasions across 10 California counties during the 1970s and 1980s.