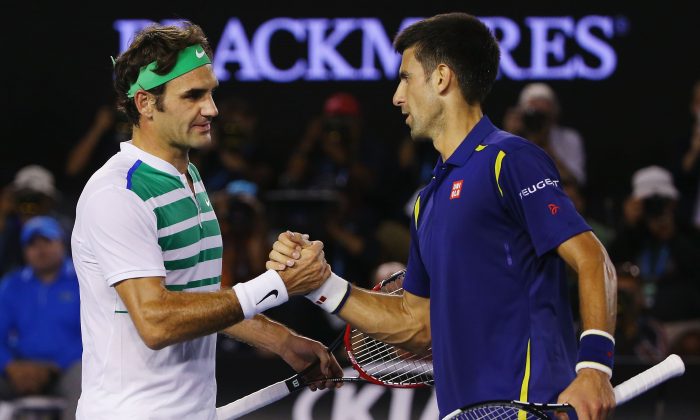 World No. 1 Novak Djokovic blew past third-ranked Roger Federer in the Australian Open semifinals 6–1, 6–2, 3–6, 6–3 on Jan. 28 to put himself in the finals of a fifth straight major and take his first lead (23–22) in his longstanding rivalry with the great Federer.

Should he go on to win the title, it would mark the 11th major championship for the 28-year-old Djokovic—which would tie him with Bjorn Borg for fourth place all-time in the open era (which started in 1968).

Amazingly, Djokovic has been able to carve out his dominance and win 10 titles while competing in an era with arguably two of the other greatest players of all time in Federer (all-time best 17 majors titles) and Rafael Nadal (tied for second with Pete Sampras at 14).

A case could easily be made that these are the three greatest players of all time, playing at the same time.

The argument for Federer is an easy one. No one has more Grand Slam titles than he does, and only three others have won all four majors—Andre Agassi, Rod Laver, and Nadal.

No one has spent more time at No. 1 in the rankings than Federer’s 302 weeks (that’s nearly six years), and few—with the exception of Jimmy Connors—have remained as highly ranked into their 30s as the 34-year-old has. (FYI, Connors was ranked in the top five as late as age 35.)

Federer has been around so long that his once-fierce rivalry with Nadal—which was then replaced by Nadal/Djokovic in 2011 as the best in the game—has come full circle with Djokovic/Federer becoming the main event in men’s tennis.

Nadal—tied with Pete Sampras for second all-time with 14 majors—has clearly faded over the past year. The Spaniard, who was once No. 1 for 57 straight weeks, hasn’t been in the top three since last March. But he’s still at an age (29) where he can possibly rebound to form and win another French Open—which would give him some breathing room when comparing him to Sampras.

Even so, he makes a compelling case.

Sampras was 31 when he won his last major—Nadal had just turned 28 when he won his last—though he had already fallen to 14th in the world, and at the time it had been over a year since his last foray into the top five. His 286 weeks as No. 1, though, are more than double Nadal’s 141. Yet Nadal has battled numerous injuries—as well as Federer and Djokovic—in his bid for the top spot.

Sampras played in the 1990s, an era when Andre Agassi was routinely his toughest opponent.

Agassi was certainly no slouch. He’s tied with Jimmy Connors and Ivan Lendl for sixth all-time with eight Grand Slam titles. But he also had quite an inconsistent career, once falling to 141st in the rankings as a 27-year-old only to rebound to win five titles after turning 29.

But he’s no Federer—or Djokovic.

Djokovic isn’t done winning, though. The world No. 1 has already spent more weeks at the top (183 and counting) than Nadal and has had to somehow win while coming into his own with Federer and Nadal still in their primes.

In fact, since Federer first became No. 1 in the rankings on Feb. 2, 2004, no one other than himself, Nadal, and Djokovic has attained the top spot. That’s nearly 12 years—and counting—with just three players occupying No. 1.

And while those three hogged the top spot of the rankings for a shorter yet still-impressive amount of time, they didn’t dominate the Grand Slam events the way Federer, Nadal, and Djokovic have.

While Federer is first in major wins, he’s also first all-time in major finals appearances with 27. Nadal is alone in second with 20, and Djokovic already has 19—tied with Lendl for third-most.

Meanwhile, the Connors–Borg–McEnroe era was at its most dominant when the trio combined to win 19 of 30 majors from Wimbledon of 1976 through the US Open of 1983. An impressive run, but clearly lagging behind the current trio.

That’s why this is the golden era of men’s tennis.