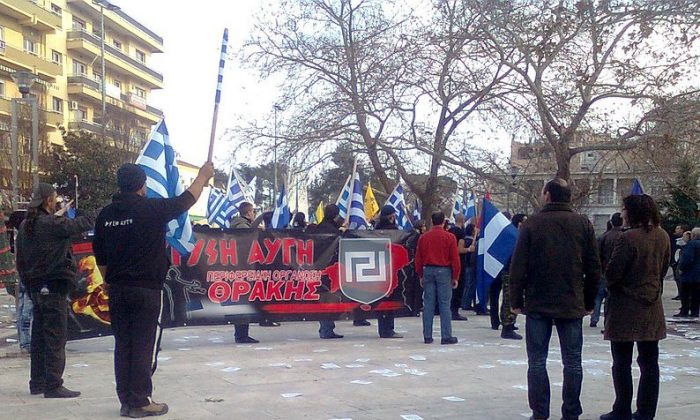 The spectacular rise of the extreme-right Golden Dawn in Greece has broken the taboo that once surrounded this small political party often described as neo-Nazi. Golden Dawn has successfully exploited rising social and economic tensions in Greek society to enter the Hellenic parliament in 2012 and now enjoys the support of 15% of the population according to recent polls. However, the arrest of the party’s leader on September 28th, along with four Members of Parliament and fifteen other party members, has exposed the inner workings of a violent organisation with possible links to Greece police.

Only four years ago during the October 2009 elections, held just before Greece’s credit rating was downgraded, Golden Dawn was an insignificant political party with no seats in the country’s parliament and less than 1% of the vote nationally. In municipal elections held in November 2010, Golden Dawn made its first electoral breakthrough, claiming 5.3% of the vote in Athens and winning a seat on the City Council. The real breakthrough, however, came during national elections in May 2012, when the party received 7% of the popular vote, entering the Hellenic Parliament for the first time in its history with 21 seats.

In the weeks following the May elections, negotiations failed to yield a government and Golden Dawn lost three seats in a second round of elections held only a month later. Nevertheless, the small party many commentators criticise as fascist and neo-Nazi, had triumphantly burst onto the national political scene in a country were mention of the party was once taboo.

The party has been able to capitalise on growing public discontent fueled by corruption and mismanagement by established political parties and the fallout of the economic crisis in Greece, which has led to drastic cuts to jobs, wages and pensions enforced by the country’s international lenders. Greece’s geographic location has also ensured a steady flow of immigrants seeking access to the EU, which has caused significant social problems in the country. The party once famously garnered grass-root support by organising food hand-outs that excluded immigrants.

The future of the party now seems uncertain, although it can still boast 15% support among the public according to recent opinion poles. On September 28th, the party’s leader, Nikolaos Michaloliakos, along with four other Members of Parliament belonging to the Golden Dawn as well as 15 other party members were arrested and later charged with belonging to a criminal organisation. The arrests have uncovered the inner workings of a party now accused of orchestrating violence against immigrants across the country.

The group arrested is accused of perpetrating attacks on foreigners and political opponents, culminating in the stabbing-death of the popular left-wing rapper Pavlos Fyssas last month. Shortly after his murder, a 45-year-old man with alleged ties to Golden Dawn was arrested by Greek police. Following the arrest, Golden Dawn offices were raided by police and the ongoing investigation has since confirmed that murder suspect was in communication with party officials prior to and at the time of the murder.

The government has said that the murder of Pavlos Fyssas was the first case in which a clear link could be drawn to the highest ranks of the party. Golden Dawn has a long history of violence dating back to its creation, ranging from football hooliganism to murdering immigrants. According to Greece’s Racist Violence Reporting Network, in 2012, there were 154 cases of racist attacks and so far this year there have been 104. Almost all of the incidents have been attributed to Golden Dawn.

A woman speaking to a BBC reporter that had previously attended Golden Dawn meetings described a military-like organisation with a rigid internal hierarchy and a pervasive culture of violence. She claimed that “He [Golden Dawn member] made me an offer: he could break someone’s arm and leg for 300 euros, set a car on fire for 1,000 euros, put someone in hospital for a month for 1,500 euros”.

Such well-documented violent excesses have left many wondering why the government has failed to take action against Golden Dawn until now. According to a senior police source quoted in The Guardian, the Golden Dawn party has infiltrated the police at various levels and consecutive governments and even the leadership of the police force have turned a blind eye to “pockets of fascism”. In certain parts of the country, more than one out of two police officers is alleged to have voted for the party.

Opponents hope that the murder of  Pavlos Fyssas will prove a death-blow to Golden Dawn. His murder sparked outrage across the country as thousands of Greeks turned out to protest. Several high-ranking police officers have also been suspended or resigned recently in connection with the affair. Nikolaos Michaloliakos, however, is determined to fight back. Shortly after the arrests, Golden Dawn sent a rallying call to supporters, saying: “We call upon everyone to support our moral and just struggle against the corrupt system!”