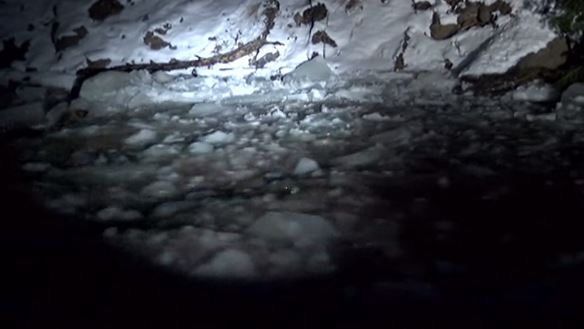 Evacuations have been ordered in Golden, CO after an ice dam broke on Tuesday night.

The dam near Idaho Springs broke, sending ice and water rushing toward Golden.

“We are currently evacuating the Clear Creek RV Park at the end of 10th Street,” the city said via Facebook. “We have also put out a CodeRed (reverse 9-1-1) to the group of condos that are on 6th Avenue along the creek.” The MillerCoors brewery was included in the CodeRed emergency calls.

Evacuees were being told to go to the Golden Community Center.

The broken ice dam potentially released a four or five foot wall of water, and witnesses said it was carrying debris. The water is around 30 degrees Fahrenheit, reported Ryan Parker of the Denver Post, citing the National Weather Service.

However, the city said in an update around 9:15 p.m. local time that the flood “turned into a non-event as the water subsided back under the ice as it came to the bottom of the canyon.”

It added: “Great work by the Golden city workers and emergency crews on their fast response to the potential danger. As of now, all is clear, but we will keep an eye on the frozen Clear Creek as a whole during this frigid weather.”

The weather service later said that in the first 15 minutes after the dam broke, water rose three feet.