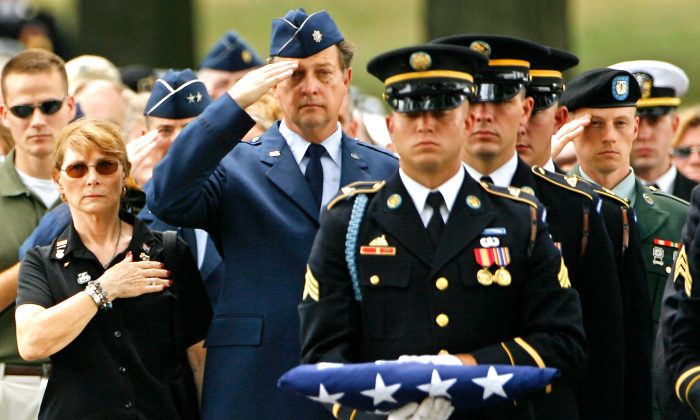 Gold Star Families: Honoring Those Who Make the Ultimate Sacrifice

According to the United States Army, the term Gold Star Family is a modern reference that comes from the Service Flag, first flown by families during World War I.

This flag included a blue star for all immediate family members with loved ones serving in the armed forces during any period of war, or hostilities.

In the event a loved one perished, this blue star was replaced by a gold star. This was a testimonial to the community that this family had lost a loved one to the cause of freedom with the ultimate sacrifice.

On the last Sunday in September 1936, America began observing Gold Star Mother’s Day. Before the end of World War II, Gold Star Wives was formed. In August 1947, the Gold Star lapel button was established, a sacred symbol of the losing of a loved one who died serving America.

Today, whenever a father, mother, sister, brother, son, or daughter, or any loved one dies serving our country, they are recognized as a Gold Star Family member.

This is a solemn tribute of the highest order recognizing those who have offered the ultimate sacrifice and their families. These sacrifices are the most profound expression of American patriotism.

The sacrifice of all who lost heroes, deserves America’s most heartfelt respect, dignity, and gratitude. All who have died serving our nation, as well as their grieving families, must always be honored without compromise.

Brenda Cox of Killeen, Texas is one of America’s bedrocks of courage, who became a Gold Star Mother.

She was presented with the Gold Star lapel button after the loss of her beloved son, Pfc. Richard Allen Dewater.

The words of his mother Brenda immortalize the sentiments of any broken-hearted parent who has lost a child, “It’s supposed to be your children burying you, not the other way around.”

Brenda has used her tragedy for healing the hearts of other Gold Star Mothers through Survivor Outreach Services.

“I have friends who know that I am a Gold Star Mother. When a friend loses a child, they reach out to me for comfort and support,” Brenda said.

This comfort and support, complimented by dignity, respect, gratitude, and honor must be the cardinal virtues not only of Gold Star Mothers and Gold Star Families, but all privileged to call America their home.

We can only truly honor America when our fallen heroes and their families are treated with the most profound respect. This respect must come from the heartbeat of the nation and expressed not only in words but in actions.

After every one of my presentations throughout the United States over the last 20 years, I have always honored the fallen military personnel and their families with a photo tribute.

This tribute has included one of my personal experiences at the full military internment ceremony of First Lt. Mark H. Dooley on Friday, July 13, 2007.

I was invited to this sacred event by his Gold Star Parents, Marion and Peter Dooley.

I met Marion at one of my school violence prevention professional development programs for the Wallkill School District in New York on Nov. 22, 2006.

Marion was grateful for my tribute to America’s military at the end of my presentation, and invited me to the internment of her son Mark. Her request pierced my heart, and there would be nothing that would stop me from traveling to Arlington for his internment.

The memory of Lt. Mark H. Dooley deserved my presence, and it was my privilege to honor his Gold Star Parents.

After the interment ceremony of Lt. Dooley, I attended a meal hosted by his family and met many of his loved ones, friends, and military colleagues.

They shared moving stories of the generosity, kindness, respect, and patriotism of Lt. Dooley.

Undoubtedly, the most important reflections were shared by Marion, his Gold Star Mother, who told me her son Mark was always concerned about others. Marion said, “Mark had a unique sense of dedication, care, and responsibility toward his family, friends, military companions, and his country.”

America must always honor the fallen as their sacrifices, inseparable with those of all Gold Star Families, are the pillars of our freedom, liberty, and our cherished way of life.

In honoring those who make the ultimate sacrifice, may America have these verses from “America the Beautiful” forever seared into our souls:

“O beautiful for heroes proved
In liberating strife,
Who more than self their country loved
And mercy more than life!”