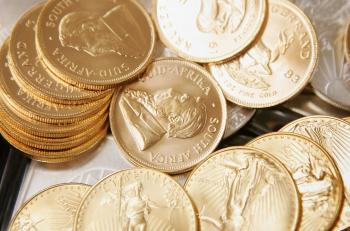 Is It Really Time to Invest in Gold?

By Antonio Perez
biggersmaller
Print
NEW YORK—Gold prices reached an all-time high at a little above $1,000 per ounce days after investment bank Bear Stearns collapsed, and it has steadily declined since. These days, gold prices tend to fluctuate between $700 and $800 per ounce.

With the stock market in a tailspin much of the last two months, analysts expected gold prices to take off as stock investors search for a safe haven. But the exact opposite effect manifested, leaving commodities traders and investors searching for answers.

Analysts have different theories about why gold isn’t as high as it should be. But most believe that it is a solid investment nonetheless, amidst a market which isn’t expected to rebound in the immediate future. After all, unlike your local savings bank, gold could never go bankrupt.

The biggest reason for gold’s sluggish growth mentioned by analysts is a sudden strengthening of the U.S. dollar against most other currencies, due to an imminent economic recession in many European and Asian countries. Gold typically is a hedge (protection) against dollar devaluation, and a strengthening dollar kept gold prices in check.

The Gold and Silver Blog (GSB), an online depository of information and analysis for commodity investors, proposed several reasons for gold’s modest valuation, including a collapse of the commodities market and weak demand due to economic woes around the globe.

“Since the summer months, commodities have been on the rapid decline. Oil has fallen by more than half from its peak price of $147,” the report said.

Other precious metals such as silver and nickel have also been hurt. While gold is holding steady, its prospects nevertheless have been dampened by the overall commodities market.

Whatever the case may be, some investors are simply sitting on their cash. The stock, bond, currencies, and commodities markets have taken such a hit that some investors may be reluctant to put their money in any type of investment.

But some analysts, such as Francisco Blanch from Merrill Lynch & Co., predict a big comeback for gold, oil, and other commodities. In a research report to clients last week, Blanch wrote that oil could top $150 per barrel, and gold could increase to $1,500 per ounce. He did not provide a timetable for reference.

History seems to support that conclusion. Gold prices typically climb during times of inflation, loose monetary policy, and an increased money supply. The U.S. Federal Reserve’s recent financial bailouts and printing of money seem to suggest that we may be headed toward that direction.

In the end, gold is subject to speculation and market turbulence like all other commodity investments. As experts weigh in with their opinions of investing in gold, investors should take solace in the following: currencies, banks, governments, and even civilizations have come and gone, but gold has always maintained its value—more or less—for the past five thousand years.