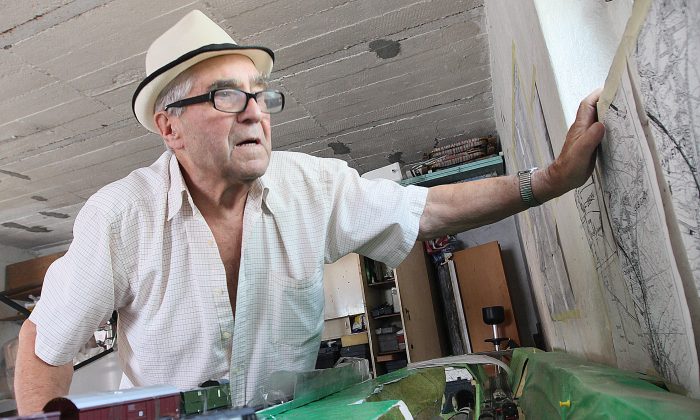 Retired miner Tadeusz Slowikowski in his garage in Walbrzych, Poland on Tuesday, Sept. 1, 2015 shows a model he made of the place where, according to him, a Nazi train, probably laden with gold and valuables, entered a mountain tunnel and was hidden as the Nazis were fleeing the Red Army in the spring of 1945. (AP Photo/Czarek Sokolowski)
Europe

WALBRZYCH, Poland — The placid woodlands around this medieval castle town have suddenly become the hottest spot in Poland — as treasure hunters descend on the area in search of a mystery Nazi train said to be laden with gold.

Government reports that two men may have located the legendary World War II treasure, purportedly buried in a secret tunnel in the bowels of the earth, have set off a frenzy of excitement among fortune-hunters from across Poland and beyond.

Polish authorities recently said that two men, whose names they have not been released, used radar to locate an armored train deep under the woodlands around Walbrzych, and believe it could be the so-called Nazi “gold train.” Rumors have swirled for decades about the train, also said to be filled with weapons, though there is absolutely no evidence that it ever existed.

A government official said last week that the claimants’ theory is based on the “deathbed testimony” of one of the men who allegedly helped load the train at the end of the war.

On one recent day, the normally quiet area was swarming with tourists, journalists and locals. Nowak, who himself has joined the treasure hunt, said he has seen cars with plates from across Poland, Germany, the Netherlands and elsewhere.

“Have you found it?” people keep saying to each other — mostly in a joking spirit. For it’s highly unlikely that any amateur treasure hunter will stumble across the train: If it exists, it will be buried deep in the ground, within a labyrinth of tunnels the Nazis built during the war, probably accessible only with the help of massive machinery and explosives.

If the train and its treasures eventually do turn up, it will belong to the Polish state. The two claimants are demanding 10 percent of the value of the find, something officials have said they will get. Serious excavation work is expected to start within weeks.

Meanwhile, the Polish military is moving in for a fact-finding mission. And police are patrolling the area around the clock, to prevent any attempts at secret digging, or other tampering with the site, or obstructing the railway traffic.

The man considered the main living source of the legend is following the excitement from his home just a few kilometers (miles) away. Retired miner Tadeusz Slowikowski, 84, heard from a German man in the 1970s of a train that left the German city of Breslau (today Poland’s Wroclaw) in the spring of 1945, as the Soviet army approached. He said the man told him the train disappeared before ever making it to Waldenburg (now Walbrzych) some 65 kilometers (45 miles) to the west.

“I have lived with this mystery for 40 years, but each time I went to the authorities they always silenced it,” Slowikowski told The Associated Press in an interview in his home. “For so many years! Unbelievable!”

He said he is “very grateful” that the two men have finally “revealed this mystery to the public.”

Slowikowski said he knows them, and that they have been to his home to tap his knowledge. Aside from his memories, he keeps prewar German maps of the area, current photographs and a model that he built of the spot where he believes the train disappeared. One of the men is Polish, and the other a German citizen of Polish origins, he said.

“They are decent people, engineers, but I cannot possibly give their names,” Slowikowski said.

During the war, the Germans were building headquarters for Hitler in Walbrzych’s Ksiaz Castle — then called the Fuerstenstein castle — a majestic structure developed from a medieval fortress that seems to belong in a fairy tale. In the rock below, they were also building a system of tunnels and bunkers, called the Giant Project. Only some of the tunnels have been found.

Slowikowski believes the system included a secret tunnel where the Germans hid the train from the Soviets — and that they blew up the entrance to the tunnel when they saw defeat coming.

In past years he did a lot of digging by railway tracks with a friend, Andrzej Gaik, at the point where he believes the train went missing. In 2001 the two dug through soil and rock and hit what they believe was the supportive wall of a tunnel underground. They were then banned by the railway authorities from excavating further.

“I am glad that these two men reported the find to the authorities,” said Gaik, a local guide. “They went a step further than we did. They examined it with ground-penetrating equipment and took this picture. We were not able to afford such equipment.”

To some historians, the entire story of a Nazi gold train is preposterous.

Pawel Rodziewicz, who belongs to a local historical society, said that documentation leaves no doubt that gold in Breslau was evacuated to the German central bank in Berlin and elsewhere, so there would have been no reason to take any to Waldenburg, where the approaching Soviets could find it.

He thinks it impossible that a secret railway tunnel could have been built into the hill near railroad tracks in frequent use. No documents have ever been found to indicate such a project was undertaken, while documents exist even for the most top-secret projects of the Third Reich, including some for the subterranean tunnels beneath the Ksiaz Castle.

But last week, a deputy culture minister, Piotr Zuchowski, said from Warsaw that he was “certain” that the train has been found, though the next day he changed that to “99 percent” sure.

Local authorities, meanwhile, are expressing more caution. Arkadiusz Grudzien, a spokesman for the Walbrzych mayor, says the city sees only a “degree of probability” about a possible discovery.

Time will tell: The Defense Ministry has ordered explosives experts from the army to the site to begin checking it, warning that the alleged train could be booby-trapped and dangerous. The work is expected to begin in earnest in the next weeks, but army experts are already there this week to examine the site.

Until more is known, amateur sleuths are living a moment of great excitement.

One, Christal Focken from Germany, was roaming the area on Wednesday. She showed The AP an elevated area that rises unexpectedly in the woods — a shape that, to her, seems suspiciously like the shape of a railway tunnel. At the start is a hole with some fractured stones, which she thinks could be the remains of the purported explosion.

“This is a railway tunnel,” Focken said. “I don’t know if a train is inside. Maybe.”

Meanwhile, local officials welcome the spotlight on a beautiful region with a rich history.

Walbrzych, Grudzien said, is being “presented as a place of mysteries, of legends, of uncovered facts and tunnels.”