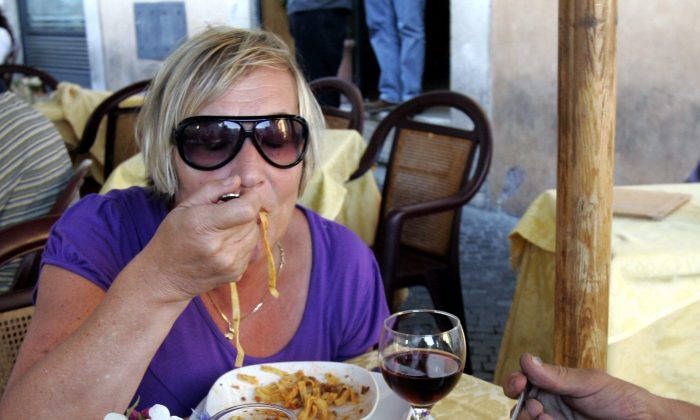 Starting this year, restaurants in B.C. and Manitoba will offer complete nutritional information through the Informed Dining program. Other provinces may also adopt the program. (AP Photo/Pier Paolo Cito)
Canada

Going Beyond the Calorie Count: Canadians Hungry for ‘Informed Dining’

A made-in-B.C. program to help restaurant diners make more informed food choices is paving the way for the rest of Canada to follow suit, says the head of a national foodservice organization.

“It’s [about] knowing what’s in your food and what you think you’re eating,” says Garth Whyte, president and CEO of the Canadian Restaurant and Foodservices Association (CRFA).

“It’s still in its infancy, but what we’re trying to achieve is something that’s consistent across the country—in every restaurant.”

Thirteen nutritional categories including salt, trans fat, and sugar are included in the information, which is posted on the restaurant’s website, in the menu, in a poster or brochure, or on a mobile app.

To notify customers of their adherence to the program, developed by the BC government in collaboration with industry and health groups, all participating restaurants display the program logo and a statement on their menu or menu board advising patrons that nutrition information is available.

“Lots of people go out because it’s an indulgence, they want to go out and have fun with their family and friends,” he says. “But others have specific dietary needs, they’re diabetic, or there are a lot of things that people watch, so it’s good to have all this information.”

Seventeen companies representing more than 12,000 restaurants, such as A&W, Tim Hortons, Boston Pizza, Milestones, and Swiss Chalet, have committed to implementing the Informed Dining program nationally by the end of the year or sooner.

Since most of the initial restaurants adopting the program are national chains, it will help spread the new standard across the country, says Whyte.

“As it goes, there are provinces, there are regional smaller chains that will start adopting it as well,” he says. “It’s a real proactive way to serve customer’s needs, and as time progresses people are going to want this wherever they go.”

Healthy Families B.C., the province’s health promotion plan, aims to have the Informed Dining program implemented in all B.C’s chain restaurants and cafeterias by the end of 2015, and at independently operated outlets by March 2016.

Manitoba has also committed to introducing the program, and Alberta, Saskatchewan, and New Brunswick are among other provinces “expressing interest,” Whyte says.

According to a recent survey conducted for the CRFA, 92 percent of Canadians feel it is important to know the nutritional breakdown of the foods they eat. The survey found calorie amounts were less important to consumers than total fat, sodium, and trans fat—with calories and sugar rounding out the top five categories.

Two-thirds of the 1,020 respondents believed that due to the complexity of menu items available, menu boards can only give a general indication of nutritional information, not the complete picture.

“This CRFA study clearly indicates that having access to full nutrition information is important to Canadian diners,” B.C. Health Minister Terry Lake said in a statement.

“Informed Dining continues to expand beyond B.C. with Manitoba’s recent endorsement, and we are happy to support other jurisdictions in implementing the program.”

The CFRA is calling on all the provinces to adopt the program so that there is a standard format across the country.