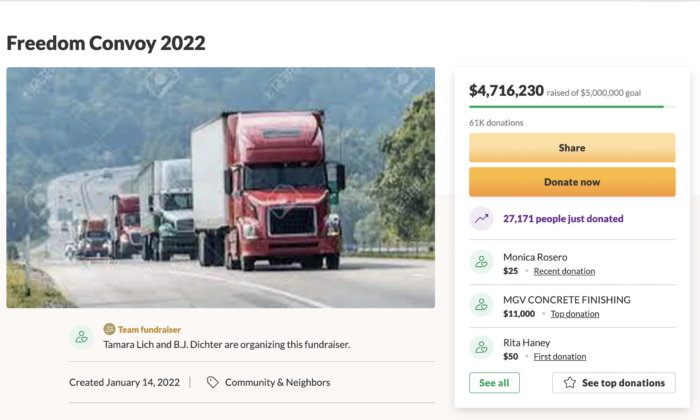 Screenshot of the fundraiser page for the "Freedom Convoy" on GoFundMe. Truck drivers are gathering in Ottawa on Jan. 29, 2021, to protest the federal COVID-19 vaccine mandate for cross-border truckers that took effect Jan. 15, 2021. (Courtesy of GoFundMe.com/taking-back-our-freedom-convoy-2022/Screenshot via The Epoch Times)
Canada

The crowdfunding platform GoFundMe says the fundraiser for the truck drivers who are to heading to Ottawa protest the vaccine mandate for cross-border truckers is still accepting donations, it’s just that funds are temporarily on hold pending a review of how the money will be distributed.

“To confirm, the fundraiser has remained live and continues to accept donations,” a GoFundMe spokesperson told The Epoch Times in an email on Tuesday.

“We are continuing to work directly with the organizer to gather information about how funds are being distributed, this is part of our standard process to ensure the protection of all donors. Once a withdrawal plan is provided by the organizer, our team is on standby to safely and quickly deliver the funds.”

On Jan. 22, hundreds of vehicles set off from northern British Columbia, with more truck drivers joining from across Canada along the way. The organizer, Canada Unity, will stage a huge demonstration at Parliament Hill on Jan. 29 when thousands of trucks converge in the capital.

The majority of donations were small amounts given anonymously, while a few made larger contributions, including the largest payment of $11,000 from a donor identified as MGV Concrete Finishing.

Lich said in a video posted on the Freedom Convoy 2022 Facebook page on Jan. 23 that she had been in contact with GoFundMe about the donations. She said the platform was “just giving us some hoops to jump through.”

Lich added that she has requested GoFundMe to provide a letter detailing when they will release the funds, as well as their reason for not releasing the funds.

“The account is not frozen. It’s just being held pending more information,” she said. “So don’t panic, don’t worry.”

Canada Unity issued a statement on its website on the GoFundMe initiative, saying a finance committee is being formed to deal with the distribution of the money, which will occur in two ways.

Those who are able to cover their own expenses for the trip may later submit their receipts to the organizer for a reimbursement via e-transfer, the statement says.

Those who plan to make the trip but need funds upfront can receive financial support if they provide “an email chain and confirmation that you are participating.”

“To ensure this money is going where it needs to go, each driver will be registering with their respective road captains. If you aren’t on the list you will NOT receive any funds,” the statement says.