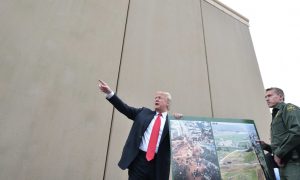 Did Trump Just Hint at Building the Border Wall Using the Military?
0 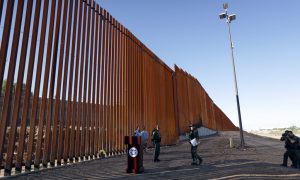 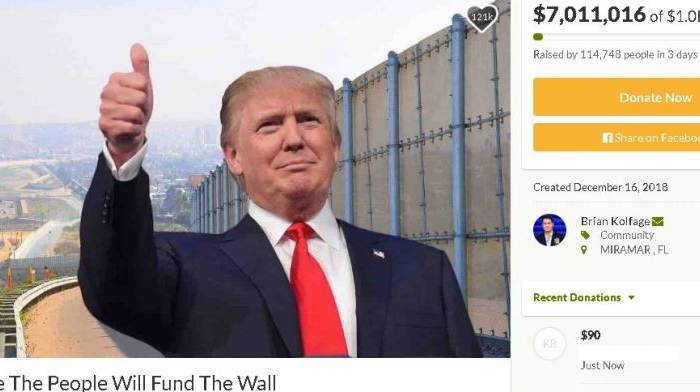 A GoFundMe page titled, “We The People Will Fund The Wall,” has raised about $7 million out of $1 billion as of Dec. 20. (GoFundMe)
US News

A GoFundMe page titled, “We The People Will Fund The Wall,” has raised more than $7 million out of $1 billion as of Dec. 20. In less than an hour late on Thursday, donors contributed more than $500,000.

The page was set up by Brian Kolfage, a triple-amputee Air Force veteran who received the Purple Heart.

“As a veteran who has given so much, 3 limbs, I feel deeply invested to this nation to ensure future generations have everything we have today. Too many Americans have been murdered by illegal aliens and too many illegals are taking advantage of the United States taxpayers with no means of ever contributing to our society,” his page reads.

He noted that the U.S. government has accepted large private donations in the past, citing billionaire David Rubenstein’s $7.5 million contribution to repair cracks in the Washington Monument in 2012 following an earthquake.

“If the 63 million people who voted for Trump each pledge $80, we can build the wall,” Kolfage said on the page. He added that it equates to about $5 billion and said that “even if we get half, that’s half the wall.” He added, “We can do this.”

One-hundred percent of the donations, he said “will go to the Trump Wall,” he is “working with a law firm on a legal document that will bind the government to [use] the funds for the border wall itself, nothing else.”

And, “If we don’t reach our goal or come significantly close we will refund every single penny. We are working on a time frame to achieve,” the former U.S. Airman said.

Kolfage said he wanted to let donors or potential donors know that it isn’t a scam.

“I’m using my real name, my real information, you can contact me and hold me accountable. People who try to scam you will not be upfront with their information, they will hide and not use their name. I have a public figure Facebook page with a blue check mark,” his page said. “I’m a retired United States Air Force member who was wounded in Iraq, and lost 3 limbs. I have a website BrianKolfage.com where you can verify more about me. I will respond. I’ve been on Fox News many times, you can see I’m credible and a real person,” he added.

GoFundMe is paying attention to the campaign, it confirmed.

“The funds are safely held by our payment processor and we will work with the organizer to transfer funds to an appropriate recipient or refund all donors, as stated in the campaign story,” a GoFundMe spokesperson told People magazine on Dec. 20.