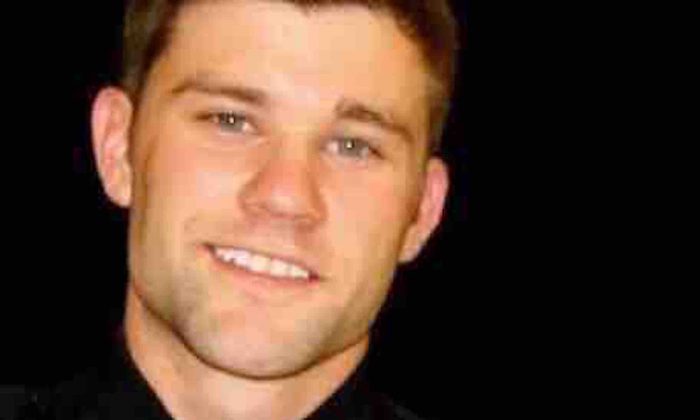 A campaign has been set up to help recoup medical and recovery costs for Midland Police Officer Zack Owens, one of the three members of law enforcement injured in a shooting rampage in Texas in which seven people were killed.

The shooting began Saturday afternoon with an interstate traffic stop where gunfire was exchanged with police, setting off a chaotic rampage during which the suspect hijacked a mail carrier truck and fired at random as he drove in the area of Odessa and Midland, two cities in the heart of Texas oil country more than 300 miles west of Dallas.

The suspect shot “at innocent civilians all over Odessa,” according to a statement from Odessa Police, which did not name the man or offer a motive.

The condition of the three law enforcement officers injured was not immediately released. Gerke said there were at least 21 civilian shooting victims.

‘We Don’t Know the Outcome of the Situation’

Owens suffered numerous injuries after being shot multiple times “in the line of duty during an active shooter situation,” said Abigail McCullough, a family member who set up the fundraising campaign.

“Please keep Zack in your prayers as we don’t know the outcome of the situation at this time,” McCullough added.

McCullough said Owens was shot multiple times in the arm and hand. His most serious injury, McCullough noted, was that glass shards had struck him in the eye.

She called for “continued prayers for everyone involved in today’s tragic events.”

At the time of reporting, the campaign had garnered over $42,000 out of a target of $50,000, with some donors posting touching notes of tribute.

“Officer did what most couldn’t and that’s stand between our city and the devil himself,” a donor on the GoFundMe platform commented, adding, “and he was seriously injured for it. Figure helping out to get him patched up won’t hurt.”

“God bless you. May you recover quickly. Thank you for your heroic service.”

A campaign has also been launched to help a 17-month-old infant with medical costs after she was gravely injured in the recent Odessa-Midland shooting spree.

“Anderson Davis was the 17-month-old baby that was hit with a bullet fragment from the Odessa, Tx shooting,” wrote Haylee Wilkerson, who set up the GoFundMe account.

The infant, Anderson Davis, was hit by bullet fragments, which punctured a hole through her bottom lip and tongue, and left her bottom teeth knocked out, according to the child’s mother.

The bullet fragments also struck the baby in the chest, her mother said, and as a result she “has shrapnel in her right chest, which thank God is superficial.”

“She is alive,” the mother said, adding, “when others are not alive.”

“Her vitals are good,” she said. “She is being flown to Lubbock while we drive.”

“I ask you to continue praying for our hearts as we experience this, pray for complete healing of Anderson, pray for every other family in our same situation, or worse, today and pray for the shooters,” the mother said.

“Please help me by raising money for this sweet sweet baby girl who is so little and doesn’t realize what is happening,” Wilkerson added, adding the family would face considerable expenses.

“No little one or parents should have to go through what this family is going through,” one of the donors commented on the campaign page. “My heart and prayers and donation are with you.”

“We are praying for this beautiful little girl and her family from neighboring El Paso. Keep the faith!”

The terrifying shooting spree that left five people dead began on Saturday afternoon when Texas state troopers tried to pull over a car for failing to signal a left turn, police chief Gerke said at a press conference.

Texas Department of Public Safety spokesman Katherine Cesinger said on Saturday that before the vehicle came to a stop, the driver “pointed a rifle toward the rear window of his car and fired several shots” toward the patrol car, 7news reported.

The suspect, who has only been identified as a white male in his mid-30s, then hijacked a U.S. Postal Service vehicle after ditching his car. He then began shooting at random and injuring multiple people.

He eventually made his way to a Cinergy movie theater in Odessa, where he was located by police officers and shot dead, Midland Police Department said.

‘He Had a Very Large Gun’

Shauna Saxton was one of the terrified drivers who said she encountered the gunman during his rampage, during which multiple witnesses described gunfire near shopping plazas and in busy intersections. Saxton was driving with her husband and grandson in Odessa and had paused at a stoplight when they heard loud pops.

“I looked over my shoulder to the left and the gold car pulled up and the man was there and he had a very large gun and it was pointing at me,” she told TV station KOSA.

Saxton said she was trapped because there were two cars in front of her. “I started honking my horn. I started swerving and we got a little ahead of him and then for whatever reason the cars in front of me kind of parted,” she said sobbing. She said she heard three more shots as she sped away.

Cellphone video showed people running out of a movie theater, and as Odessa television station KOSA aired breaking developments on live TV, their broadcast was interrupted by police telling them they had to clear the area.

President Donald Trump wrote on Twitter that he had been briefed on the Texas shootings by Attorney General Barr and added that the “FBI and law enforcement is fully engaged.”