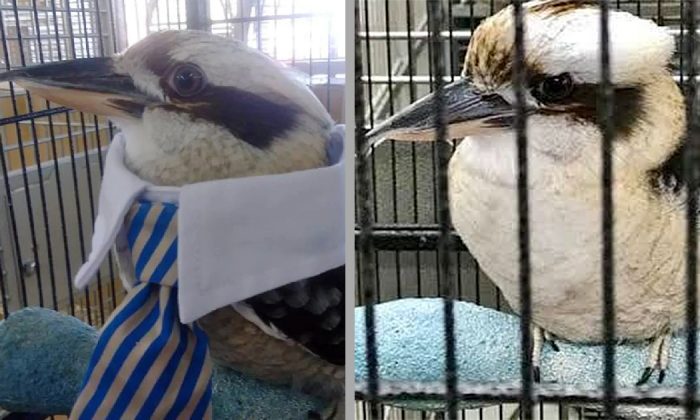 Thunder the kookaburra dressed in a white collar an tie costume (L) and in his natural state (R) in Virginia Beach, Va. (Courtesy of Michelle Crow and Virginia Seashore pet store)
US News

GoFundMe Campaign Hopes to Give Thunder the Kookaburra a Better Life

An online fundraising campaign launched on March 26 is aiming to give a more suitable home for a kookaburra bird found on sale in a Virginia pet store.

The Bring Thunder Back Down Under GoFundMe appeal hopes to raise A$2,000 (US$1,418) to buy and relocate Thunder the kookaburra, which has been held captive in a cage for about four years at the Virginia Seashore pet retailer.

It comes after Australian expatriate Wendy Davidson, who lives in the United States, discovered what she considered to be a wild and protected animal being advertised for nearly A$1700 (US$1200). The bird was alone, confined to a small cage and sometimes dressed-up in tiny outfits for the amusement of customers.

The images outraged animal lovers who labelled the pet store as “cruel” and accused the staff of dressing the bird up “like it is a doll for people’s sick amusement.”

Contrary to widespread reports suggesting it is illegal to keep a kookaburra as a pet, in New South Wales it is still legal to keep certain native birds in Australia as pets, such as the laughing- and blue winged-kookaburra, provided the necessary B2 or B3 permits are obtained from the State Office of Environment and Heritage beforehand. It is currently illegal to capture a native kookaburra in Australia and export it to other countries.

However, in many parts of the United States, it is not illegal to keep the bird a pet since it is not a native species. In Virginia, kookaburras are not listed as a prohibited non-native animal species, so it is not illegal, according to The Spruce Pets.

However, Davidson felt “deeply saddened” after seeing the bird living so far from home where it would be in its natural habitat, mating with a chosen partner for life, and living in a family group.

“I couldn’t stop thinking about him being a prisoner in solitary confinement,” she told News Limited.

Virginia Seashore has since closed its Facebook page because sympathisers of the bird have bombarded the store with angry phone calls, while others left negative comments complaining about the kookaburra’s living conditions.

“Animal cruelty at its finest,” one person said.

“Inhumane pet shop. Australia called it wants it kookaburra back,” another said.

A third added, “Please surrender Thunder the kookaburra to a sanctuary who specialise in Australian wildlife. It is very inhumane to house a wild Australian bird in a pet store, let alone dress him up in ridiculous outfits.”

‘He was hatched in captivity legally’

The pet store said the kookaburra was not taken from the wild and shipped to the store; rather it had been bred in captivity and legally sourced.

“Thunder’s lineage comes from a line of kookaburra that were legally brought into the states and legally bred through our licensed breeder. He was hatched in captivity legally,” Virginia Seashore said in a Facebook post dated March 27. “Exportation of birds was outlawed over 20 years ago … all of our baby birds including Thunder have come from our reputable baby breeders that we have been doing business with for 30 years.”

Symbio Wildlife Park in Helensburgh, 59km (37 miles) south of Sydney, told the Daily Mail the pet store’s claims could be true, as a number of kookaburras and other exotic birds were at one time exported to the United States before stricter regulations took effect. The bird may simply be the 10th generation of birds bred in captivity, the wildlife park said.

Davidson tried to protest the sale of Thunder and lobbied the Australian Consulate-General in New York City to make a complaint to the American Society for the Prevention of Cruelty to Animals.

However, the Australian Department of Agriculture and Water Resources said even if Thunder were freed, the bird would never be allowed back into Australia due to strict biosecurity laws.

“This is because we don’t know what diseases it may be carrying or its health history,” a spokesperson from the department said. “Unfortunately, it is not possible to bring the kookaburra back to Australia.”

Within three days the GoFundMe appeal raised twice the amount needed to buy and re-home Thunder in the United States, with pledges totaling at least A$4,143 (US$2,940) out of the A$2000 (US$1,418) required at the time of publication.

“There have been offers of placements for him in wildlife sanctuaries and I am waiting to get verification of theses places and people before your money is given to them,” fundraising coordinator Michelle Crow said in an update dated March 29. “I’m hoping this is quickly so that Thunder gets to place catered for his needs very soon but not haphazardly so that Thunder will be caused undue stress.”