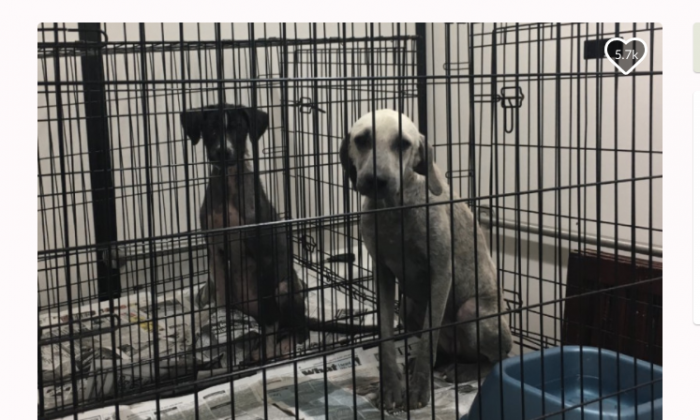 A screenshot of the GoFundMe page for 4 Paws Farm that is helping dogs and cats impacted by Hurricane Harvey. (Screenshot via GoFundMe/Nancy Stoorza)
US

As water has inundated parts of Texas from Hurricane-turned-Tropical Storm Harvey, so have donations to a Texas nonprofit that unites dogs and cats with their owners.

4 Paws Farm has an animal sanctuary about 50 miles northwest of Houston in Hempstead. It takes in animals too sick or problematic to be adopted out, and works with a network of foster homes to house pets that can be rehomed. It also has a dog and cat food pantry that supplies other shelters and for people who can’t afford pet food for their cat or dog, their website says. But right now, they’re in need of food themselves.

The volunteer-based nonprofit set up a GoFundMe campaign to help transport, feed, shelter, and treat the large influx of animals they are getting, and apparently, people care as much about the displaced dogs and cats from Harvey as they do.

As of Aug. 31, the campaign was “trending” on GoFundMe, having raised almost nine times their goal of $25,000.

4 Paws is partnering with Facebook community group “I Love My Dog” that has over five million followers.

The page reports that shelters have been set up in Houston and Spring, about 20 miles north of Houston, but that they have no supplies for the pets they are taking in.

However they have been able to buy lots of crates to transport the pets so that at least someone is looking after them.

“The ‘4 Paws Farm Team’ (with funds raised from all of you) was able to buy out all of the Tractor Supply store’s crate inventory in neighboring towns and was able to pass them off … to the shelters,” the admin wrote on the page.

One of the main issues they are facing right now is lack of medical supplies. The Facebook page says animals are coming in with eye and upper respiratory infections, and they expect the number of animals with these conditions “to continue to increase substantially.”

The page says it has ordered a large shipment of antibiotics and vaccinations that are being sent to Houston and will be distributed to nearby areas.

The other supply they are low on is volunteers.

Because of mandatory evacuations, finding people to staff the shelters has been challenging.

Neither 4 Paws, nor I Love My Dog immediately responded to a request for comment.

The category 4 hurricane that swept through southern Texas and moved east up the coast has wound down to a tropical depression. The worst is likely over for Texas, but the death and destruction it has left in its wake is massive.

The death toll of those suspected to be related to the storm has risen to 46, The New York Times reported, and the storm and flooding has resulted in billions of dollars worth of damage. Private weather firm AccuWeather estimates the cost of the damage will be around $190 billion.

It is unknown how many pets have died or have been orphaned in the natural disaster, but stories of animal rescues abound.

One man and his son have been traveling around flooded areas rescuing cattle and horses whose pastures and paddocks were inundated.

A photographer for the Daily Mail snapped a picture of a dog left tied to an electricity pole as flood waters rose around it. The photographer later rescued the dog and was trying to reunite it with its owner before the photographer was sent to the hospital for burns from an electric wire.

After a picture of 15 seniors sitting in waist-deep water in their assisted living facility in Dickinson, Texas, went viral, many wanted to know what became of the cat in the background after the seniors were evacuated. Local media reported the husband of the facility’s owner went back to get the cat and other animals that had been left behind the next day.

And at least 31 dogs were rescued from a Texas kennel after the owner left them behind, claiming that there were no other dogs on the property.

Dozens of other GoFundMe campaigns have sprung up to help animals impacted by Harvey, but none have seen the outpouring of support—over 5,600 donations in five days—that 4 Paws Farm has seen.