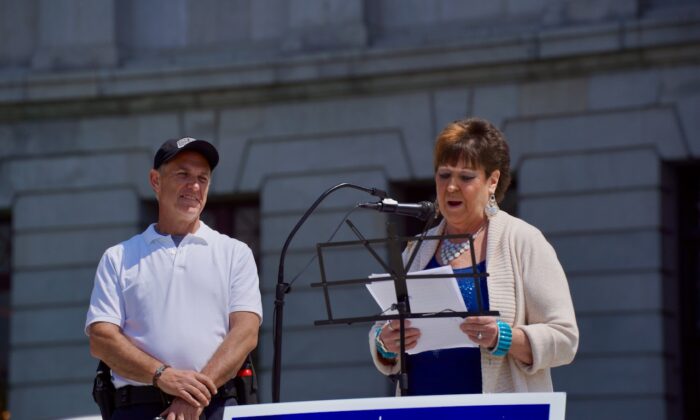 Jane Taylor Toal, president of Citizens for Liberty based out of Montgomery County, speaking at the “Make Pennsylvania Godly Again” rally in Harrisburg, May 2, 2022. (Steve Wen/The Epoch Times)
Local News

HARRISBURG, Pa.—A prayer rally was held on the steps of the Pennsylvania State Capitol on May 2 out of concern that America was heading towards socialism.

State lawmakers and political candidates were among speakers at the “Make Pennsylvania Godly Again” rally organized by the group Citizens for Liberty.

“We need to implement God back into our government,” Jane Taylor Toal, the president of the group based out of Montgomery County, told The Epoch Times.

As Pennsylvania’s May 17 primary elections draw near, Toal and supporters said they were concerned about the state’s future direction.

“We need to have godly people in legislation because they cannot lead us if they aren’t godly. They will lead us into socialism and communism, which we, unfortunately, are falling into slowly but surely now,” she said.

Toal said more and more people currently feel that their God-given birthright to the Second Amendment is being taken away. Their First Amendment has been silenced, and now the Fourth and Tenth Amendments are being gotten rid of.

“They just totally leave God out of the equation,” she said. “That’s what we were founded upon. And we cannot govern people without God leading us first.”

Dr. Rick Saccone, a former state lawmaker and two-time congressional candidate from the Pittsburgh area, was the event’s keynote speaker.

“Our country is going down the path of socialism. There’s no doubt about it. More government control,” Saccone said.

Saccone is running for the Republican nomination for lieutenant governor of Pennsylvania this year.

Saccone spent time in North Korea as an observer on an American-sponsored nuclear power project to freeze North Korea’s homegrown plutonium production. He said he knows what it’s like to live in a country ruled by communists.

“I lived in North Korea for a year. I saw what it was like to live in a real communist country. It’s not something you want,” said Saccone.

“I know most people would not want to live under [it], and yet we are slowly working our way toward that. We have to turn the tide and turn back toward freedom,” he said.

Saccone pointed out that the Pennsylvania State Constitution was written invoking the guidance of God.

“This is the very first line. ‘We, the people of the Commonwealth of Pennsylvania, grateful to Almighty God for the blessings of civil and religious liberty, and humbly invoking His guidance, do ordain and establish this constitution’,” he said.

Another speaker, David Maloney, Pennsylvania state representative for the 130th Legislative District, told The Epoch Times about concerns over what is going on in society.

“I get a lot of contacts from people asking what is going on? Why are we like this? Why is everything seeming so upside down?” Maloney said.

Maloney mentioned that whenever this happens, he will remind people to remember the warnings of the founding fathers.

“They gave us the convictions they had about how they founded our country. And much of it, if not most of it, was on Christian values,” he said.

“And their whole pretence was that unless you had principled moral people, you wouldn’t have a government to work for the people,” he said.

“We have a country that, for all these years, has had many, many patriotic people serving, and a lot of them were Christians,” Schaefer said.

“A lot is said about tolerance, and we seem to tolerate a lot of things but a lot of times Christianity is not tolerated. Whenever Christians speak up, we’re called haters, bigots, or something like that. And that’s really not true.”

Schaefer mentioned that the Pennsylvania Family Institute provides voters with a good voter guide which includes information showing where candidates stand on issues.