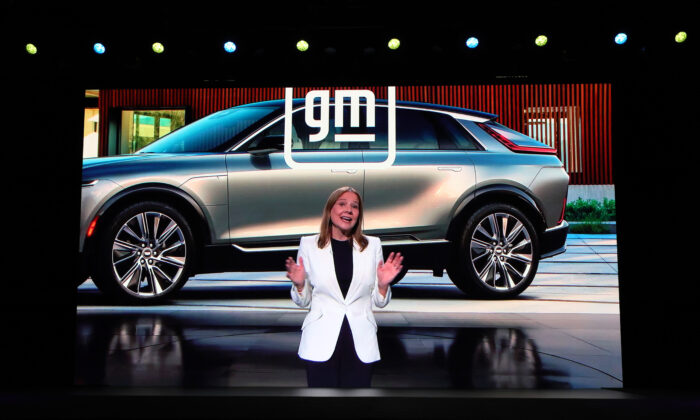 General Motors Chair and CEO Mary Barra is shown on screen as her recorded keynote address is delivered digitally at CES 2022 at The Venetian Las Vegas on Jan. 5, 2022. (Ethan Miller/Getty Images)
Companies

General Motors announced at the Consumer Electronics Show (CES) in Las Vegas on Jan. 5 that its electric commercial vehicle business, BrightDrop, has signed a new deal to supply thousands of battery powered trucks to Walmart and will supply additional units to FedEx.

The financial terms of the two deals have not yet been disclosed by GM.

GM also unveiled an array of new battery-powered copies of existing vehicle models, including electric versions of its Silverado pickup, Equinox, and Blazer SUVs, which will roll out over the next year.

Walmart, which agreed to reserve orders for 5,000 BrightDrop EV600 and smaller EV410 electric vans for its delivery fleet, will receive delivery in early 2023, according to BrightDrop.

The retailer plans to use the GM vans as it expands its InHome delivery service, as part of Walmart’s goal to operate a zero-emission logistics fleet throughout the United States by 2040.

“As important as it is that we save our customers time and money through convenient delivery options, it’s just as important that we focus on creating a more sustainable last mile delivery fleet that avoids emissions,” said Tom Ward, a senior vice president at Walmart during a video press conference.

Ward said that GM’s ability to get its new electric delivery van to market “makes them a great partner to support our growing InHome delivery service, to support the retail giant’s growing last mile delivery network and goal of operating a zero-emissions logistics fleet by 2040.”

FedEx, which had been successfully testing 500 of the electric vans in 10 service markets after an initial pilot in New York City last year, has reserved an additional 2,000 vehicles over the next few years.

It is negotiating with GM for an additional 20,000 units for its global operations.

FedEx envisions a fleet of more than 200,000 electric medium-sized delivery vehicles to achieve its own goal for a carbon-neutral footprint by 2040.

Richard Smith, FedEx Express Regional President of the Americas, on a conference call said, that FedEx expects by 2030 that all new delivery vehicles purchased will be electric and that GM’s two EV models will cover two-thirds of those needs.

“BrightDrop’s real, they’re here now, their trucks are on the road for us in California delivering packages,” said Smith, and “that’s another reason we’re leaning into them.”

Smith said that the company has discussed with GM about supplying the larger EV600 models with more cargo space that would meet the company’s needs required for the remaining third of the fleet.

Delivery services like FedEx, Amazon.com Inc. and United Parcel Service Inc. have been pledging to shift their large delivery fleets to EVs as governments around the world are pressuring companies to slash CO2 emissions.

Meanwhile, Amazon said on Jan. 5 that it will collaborate with Stellantis to develop and deploy electric vans from the automaker for its delivery network.

The commercial EV business appears to be an open playing field for legacy automakers, as major fleet operators plan to replace their gasoline and diesel-powered commercial vehicles with EVs.

GM, Ford, Toyota, Hyundai, Daimler, and other global auto giants are all preparing to roll out more commercial electric vans and trucks.

Meanwhile, Tesla, the dominant company in the electric car market, has yet to enter the commercial EV field.

GM, which entered the EV commercial van business in January 2021, has estimated that the market for parcel and food delivery vehicles in the United States will climb to more than $850 billion by 2025.

The Detroit automaker will open a plant dedicated to BrightDrop vehicles in Ingersoll, Ontario, in Canada in Q4 2022.

He said the GM subsidiary’s “holistic solution set, gives us powerful advantages that uniquely position us to support the world’s largest delivery companies, like Walmart and FedEx.”

FedEx and Walmart officials maintain that their deals with GM are not exclusive and that they are continuing talks with other EV makers.